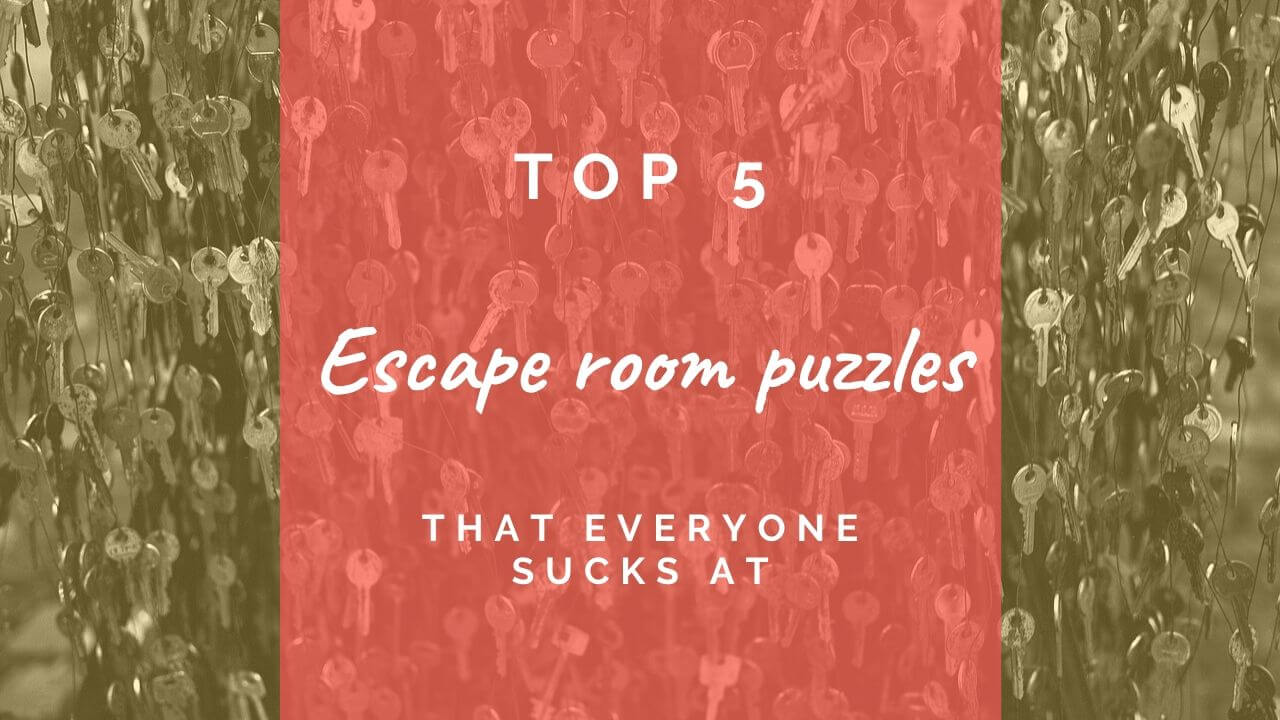 As voted for by the good folk on the UK Escape Room Enthusiasts Facebook Group.

I’ll be the first to admit it. I’m terrible at anagrams in escape rooms. I’m bad at them at the best of times – throw in a hefty dose of time pressure and I become a liability.

It got me thinking about what other types of puzzles would be considered ‘kryptonite’ for other escapees. So I posed the question to the UK Escape Room Enthusiasts Facebook group and collated the responses.

If you’re an escape room puzzle designer, this should come in handy as a word of caution when using these types of puzzles in your game. They can still be fun and challenging, but make sure there’s enough signposting that everyone has a decent chance to solve them.

CHECK THIS OUT: Ancient alphabets that make for great escape room ciphers

In a dimly-lit room where everyone’s trying to peer over the same sheet of paper, it’s easy to see why diagram puzzles in escape rooms are quite tough.

Whether you’re looking at blueprints or a circuit diagram, it all turns to gibberish when you’re against the clock.

Using a colour-coding system or a blacklight would help steer the group in the right direction.

Morse code is a great, traditional puzzle element to add into an escape room. The problem is that not everyone knows how it works – it might take a while for the penny to drop when they start hearing random beeps.

The other issue you get is that – unless you’re well-versed in Morse code – the dots and the dashes sounds pretty damn similar until you’re heard it several times.

Then all it takes is mistaking a single dash or dot and the whole thing comes undone.

You can tell I’ve had issues with this before, can’t you?

One solution to this, if you’re going for an audio-based code, is to slow down the playback so the gaps between each letter / number are longer. It also helps to put in an audio cue to let players know when a recording has looped.

Musical puzzles can be tricky at best and aggravating at worst. If you’re tone deaf, having to replicate a piece of music that you heard likely to make you want to smash the instrument in rage.

It helps if the tune you’re trying to replicate is a well-known jingle – your brain will have a better job at knowing whether the notes are correct. But if it’s just a random collection of notes on a piano, you’re in trouble.

The dreaded maths. To be honest, I’m surprised this wasn’t number 1.

If you’re lucky you at least have a whiteboard and marker pen to write notes. But even that doesn’t help the fact you’re trying to do arithmetic on the fly and under pressure.

And don’t even get me started on algebra. This is why it’s always useful to have a Numberphile on your team.

Is this even a thing?

Smell-based puzzles came out on top by a clear margin. I’ve yet to come across a smell puzzle in an escape room, but I can see how they’d be a little hit and miss.

Having to differentiate the scents of similar herbs for a puzzle is going to lead to a whole lot of sniffin’ and not much solvin’. Plus, if you walk into that room with a stinking cold, you might be stuck there for a while.

Should escape rooms keep a hefty supply of vapour rub at their venues just in case? Or should we just retire smell puzzles entirely?

There were 41 entries altogether, and it makes for an interesting look into what escape players dislike.

What’s your escape room kryptonite? What kind of puzzles are you just plain terrible at, or hate seeing in an escape room?

Let me know in the comments!