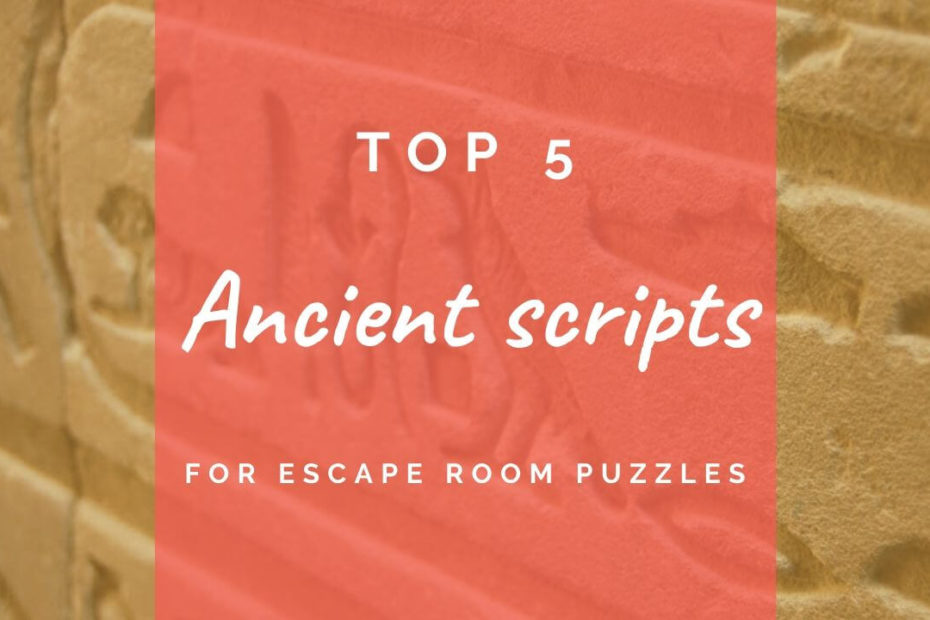 Put away that Morse Code translator and use a little something with a bit more flavour.

In researching puzzle ideas for my Puzzle Pamphlet project, I became aware that many puzzles relied on the same decoding mechanisms.

Morse code, Pigpen, Braille – used so often that many enthusiasts can identify them on sight.

So how do you go about creating a code that’s less obvious? That’s where we turn to the ancients.

There are a good many ancient scripts that are both decorative and relatively obscure, allowing you to use a code that’s less well-known.

Why should a code be less obvious?

Well, it doesn’t have to be.

But if you have enthusiasts attempting your puzzles, it’s likely that they’ll have seen many puzzle types before. They’ll see a 2×3 dot grid and think ‘Braille’.

Then it just becomes a matter of finding the decoding sheet and translating the text. There’s less discovery. It just becomes another task, and that tends to bog down the excitement and flow of a game.

Using a script that’s not as familiar allows for the opportunitiy of that ‘a-ha’ when they realise that bit of decoration has been a hidden phrase all along!

CHECK THIS OUT: Five escape room puzzles everyone sucks at

Sure, you could just make up a series of symbols that correspond to letters of the alphabet and be done with it.

The problem with that is that it’ll likely be obvious that it’s a code.

Likewise, using a constructed language like Elvish, Klingon or Dovazhul – while cool as hell – would probably stand out.

That being said, if your theme benefits from a fictional script, then have at it!

The main benefit that you get from ancient alphabets is that they’re real. They’ve evolved for a purpose and so have their own internal logic and form when used to create words. A string of Viking runes will look less out of place than random symbols meant to spell out the same word.

With that in mind, here are some scripts that will do a good job as a coded language:

This one is a bit of a no-brainer if your room is Egyptian themed, but will still out like a sore thumb if not.

If your room has an ancient Egyptian theme, the benefit of hieroglyphs is that they’ll blend in with the overall decoration. So they’ll only matter as a code when you choose to reveal the decoding alphabet, or highlight them with UV, for example.

CHECK THIS OUT: [REVIEW] Escape Rooms Cardiff – The Tomb

Useful for: Egyptian or archaeological-themed rooms

Ogham is a fascinating script, usually carved into stone in a vertical strip that runs bottom to top.

Since the vast majority of Ogham characters use horizontal lines, it’s a pretty unassuming script that you can draw attention to only when needed.

If you want to give your room a touch of the ethereal, then this script is a perfect fit.

This one is great because some people will be familiar with the look of these runes, but might dismiss them as decoration in the margins of a page, for example.

Given how often Norse runes are used for divination, you can pick a bag of rune stones pretty easily and use them as part of a witch’s hut or something similar.

Useful for: Norse, Occult and some Horror-themed rooms

The godfather of alphabets – Phoenecian is arguably where our modern alphabet all began. Much like ancient Egyptian, Phoenecian is quite symbolic in its look, so can be easily obscured to look like part of something else.

This reminds me a little of the Zodiac cipher, and so would be right at home in a serial killer themed room.

One of the oldest alphabets there is, Cuneiform’s series of carved triangles is so good because it looks like a different coding system. If you’ve a directional lock in your room, your players might think this is a code for that (though there should be enough signposting in your game to point them towards what actually opens the directional lock).

The angular script also reminds me of the likes of Klingon for your space themed rooms.

Did I miss any? Have you come across a non-traditional code in an escape room? Share your experience in the comments!