The Mystery Agency – The Balthazar Stone 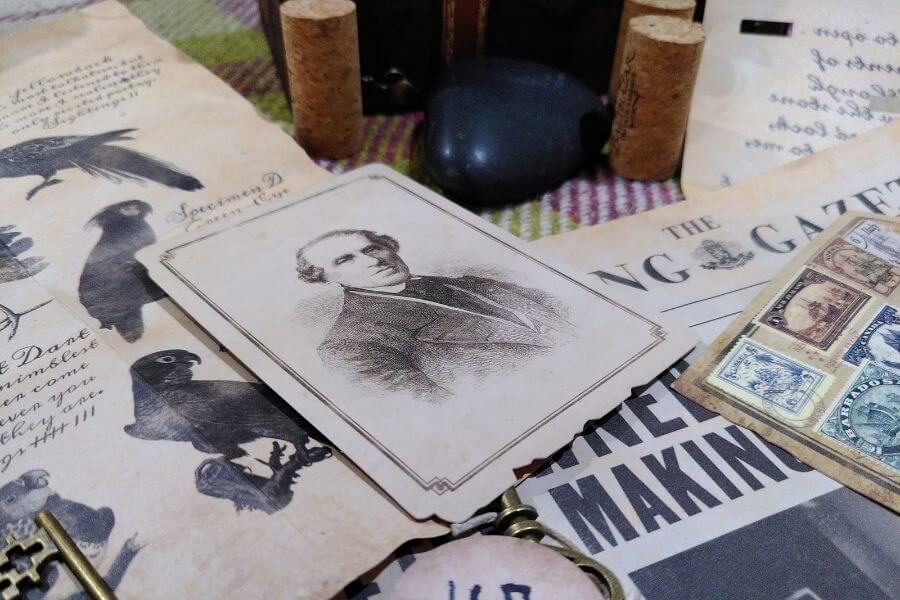 Two things that got me through 2020’s various lockdowns were play-at-home escape games and watching Mischief Theatre. Their Goes Wrong Show was responsible for most of the laugh-out-loud moments during lockdown.

And now at the centre of that Venn diagram, Mischief Theatre co-founder Henry Lewis has created an escape game – The Mystery Agency.

Mischief Theatre’s attention to detail is second-to-none, backing The Mystery Agency’s Kickstarter campaign was a no-brainer.

Let’s take a look at their first game – The Balthazar Stone.

There’s a nice blend of digital and physical elements to the game, and almost everything was well tied in with the theme and the narrative. It reminded me heavily of Madok’s Lost Treasure by Society Curiosities

There’s a really nice two-step time period shift in The Balthazar Stone, going from the early 20th century to the Golden Age of Piracy. There’s little need for suspension of disbelief as it’s all well wrapped in the modern armchair treasure hunter narrative, blending otherwise analogous materials with minimal effort.

It is a superb bit of craftsmanship, and one that I’d love to display and use long after finishing the game. There’s a surprising amount of material packed into a seemingly small wooden chest.

And, it gives me great pleasure to say, multiple locks. The box is wonderfully engineered to provide a mini-escape experience in such a small space.

There is an issue that I and a few others have experienced where the final lock isn’t secured to the rest of the box. It doesn’t impede the gameplay at all, but less honest players could bypass the last quarter of the game to get to the end.

The Balthazar Stone is themed around pirates, so you have an idea of the kind of puzzles you’re likely to get.

While the puzzles in this game did hit a lot of those notes, there’s a surprising intimacy with one of the characters as you dig up the metaphorical remains of their life.

Largely the solutions you’re looking for are digits with which you crack the various locks in the chest. The puzzles to obtain these are quite elegant, and use a mix of deciphering, pathfinding, and a bit of detective work. The deciphering puzzle was particularly cool, and was presented in a way I’ve not seen before.

The middle section of The Balthazar Stone was the most enjoyable for me – combining the disparate elements in the game with the central map, which we revisited a few times for different puzzles. There are some satisfying a-ha moments when you see how certain elements are reused later in the game.

One puzzle didn’t really make narrative sense – it was towards the end of the game when you’d delved quite deep into the box that was supposedly locked for centuries. One of the game pieces was used to solve one of the puzzles set in the 20th century portion of the game. It was a nifty puzzle, for sure, but it jarred a little.

Despite needing a hint pretty early on, I wouldn’t say The Balthazar Stone is all that difficult. We went through the game at a decent pace, so this would be well suited for a casual gaming afternoon or family game night.

We used two hints throughout our session. The hints use a ‘two steps and we’ll tell you the solution’ system, which I think works fine for a game of this difficult level. The hints are presented (online) as hand-written dossiers, keeping with the theme of the game.

Once we’d solved the game, we were given a certificate of completion and a PDF with step-by-step instructions on how to reset it.

I got in touch with The Mystery Agency about the issue with the unsecured lock in the box. Their initial response via Messenger was prompt, but it took over five weeks and three chasers to get a response via email.

I loved The Balthazar Stone. It had all the right elements of mystery and discovery that I want in a good at-home escape game. The game materials are great quality and feel like real artifacts.

The puzzles are really well designed, making me feel like a real armchair treasure hunter. The seamless attention to detail that I’ve come to love about Mischief Theatre is clearly evident here.