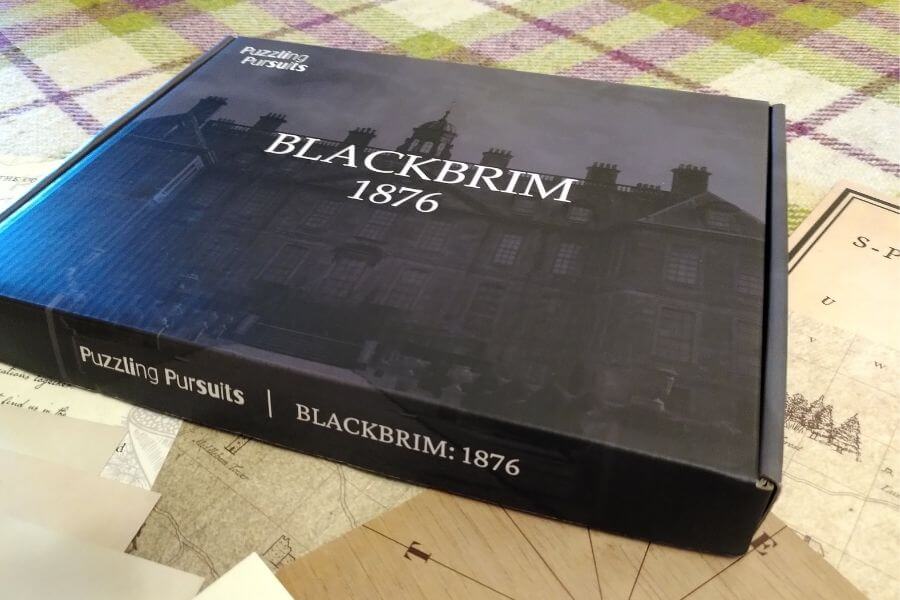 A well-made game with a great look and compelling narrative

Enter my giveaway to WIN Blackbrim: 1876!

I’ll be the first to admit that I’m a sucker for Victoriana. Any puzzle games set in or themed around the 19th Century tend to pique my interest straight away.

I’d heard good things about Blackbrim: 1876, but sadly they don’t yet ship their games across the pond to the UK.

But my luck was in – the good folks at Puzzling Pursuits made an exception so I could try out Blackbrim first hand.

And I certainly wasn’t disappointed.

Set during the Victorian era in the English town of Blackbrim, you are a private detective who has received a package containing mysterious clues from a police commissioner shortly before he was kidnapped.

He and the entire police force are being held hostage. To save them, you must solve all the riddles the perpetrator left behind…

As soon as you open up the box, you know that you’re holding a quality product.

All of the materials were high quality, presented in nested envelope which were tucked inside belted case files. And they fasten themselves with a card strip made to look like a belt, which is pretty cool.

The whole game is paper-based, but there’s a decent variety of ephemera of different textures to satisfy tactile players like me – wax-sealed letters and newspaper clippings accompany the glossy pages for the higher-quality artwork.

Speaking of the artwork, there’s good consistency of style throughout the game and helps to sell the Victorian aesthetic. We did spot one hiccup where you could see where they’d cut around something in Photoshop and it kind of pixelated.

We really enjoyed the story – a compelling Victorian-era sleuthing-turned-escape game with a solid narrative underpinning the whole game.

The game was split into two parts, and the transition from part one to part two neatly shifted our gameplay goals in a similar vein to what we experienced playing The Scattered Cards.

There’s quite a lot packed into this game! The game is pretty non-linear, which suited us well as we could pick and choose what puzzles to work on according to our strengths (for some reason I got the maths puzzle again).

For the most part, the puzzles are types I’d largely seen before, so nothing particularly groundbreaking. There was one puzzle towards the end that had a secondary layer, making me do the ‘oooo’ of appreciation.

There’s a good, diverse puzzle mix in here. Deduction, maths, manipulation, a spot of deciphering and a bit of wordplay to name a few. Mim and I were evenly matched in this game – there was enough going on to need both of our skillsets and we both felt like we’d contributed to the game.

The signposting was well done and in keeping with the storyline throughout. In one or two cases we only saw it in hindsight as it was well baked into the narrative.

There wasn’t a great deal about the game that was particularly challenging, though on a few occasions the puzzles made me feel hella smart for solving them (which is what all puzzle games should aim for).

We blitzed through part 1 in 30 minutes, and spent the next 90 minutes on part 2. I’d have preferred it to have been more of a 50/50 split – I felt the first chapter was a bit too short, and our brains had started to wind down towards the tail end of part 2.

We used a few hints to help us to victory – the Blackbrim hint site gives a three-stage hint followed by the answer. Nothing fancy, but it gets the job done.

It does, however, have an answer-checking function, which came in handy for us. There were also one or two cheeky retorts for some incorrect answers.

There’s also an inventory page where you can make sure you’re looking at the right materials before you dive in.

We both really enjoyed playing Blackbrim. It’s a well-made and wonderfully-designed game with a great look and compelling storyline. The puzzles are balanced and will make you feel like a smarty pants when you solve them, and who doesn’t want that?

Blackbrim: 1876
Designed by Puzzling Pursuits
Cost: $29.99 (convert to GBP)
Duration: 120 minutes
Requirements: Notepad and pen, phone or tablet with access to the Internet