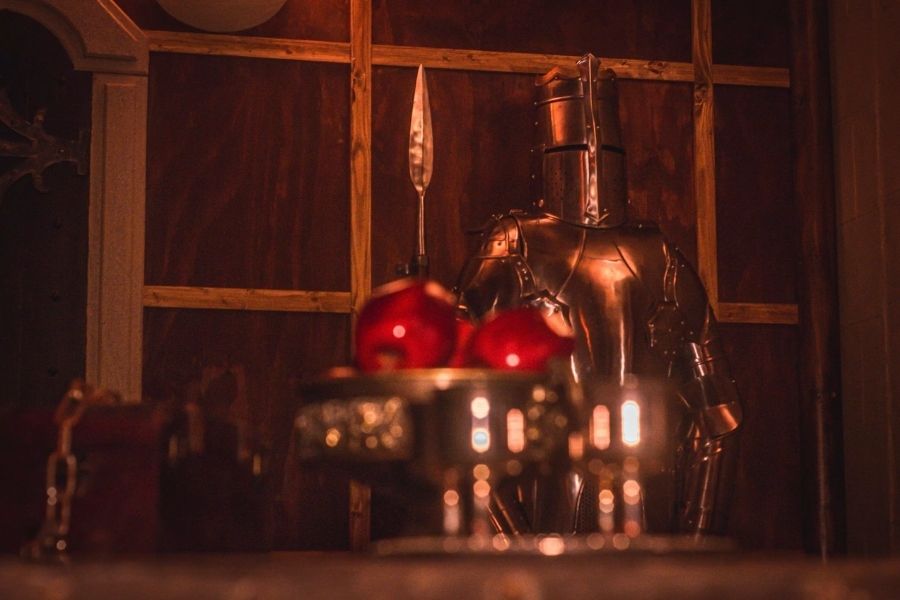 A delightful Medieval Heist with an almost-cinematic quality

As soon as restrictions on escape rooms in Wales were lifted, I made a beeline to book The Cardiff Castle at Escape Rooms Cardiff.

Escape Room Cardiff has been one of the most consistent venues in terms of the quality of their rooms. And, being a history buff, the local, Medieval theme was very much up my street.

As it happened, our trip coincided with my wedding anniversary. So, with bellies full of second breakfast we entered into our second post-lockdown escape room. It was meant to have been our first, but some last minute repairs were needed so we tackled Finding Sherlock before hitting the castle.

It’s 1404 and the English have occupied Cardiff’s most precious asset – our castle.

Owain Glyndwr has plans to take back the castle in an epic battle but first he needs your help!

You need to search around the castle to find the secret entrance and retrieve the plans so he can formulate his attack!

The Cardiff Castle has the best set design I’ve seen in an escape room, hands down. It’s a beautiful room to be in, and a far cry from the sparse white walls of its original Heist setting.

There’s a wonderful sense of atmosphere and attention to detail – the musk of the straw on the floor, the flickering torchlight, the little details in the props. We should have spent our remaining time in the room just admiring the decor!

It all comes together wonderfully and fully took me away from the fact that I was on St. Mary’s Street in Cardiff.

I was in Cardiff Castle.

There’s a wonderful sense of exploration in this room. If you imagine the Medieval Zone in the Crystal Maze, you won’t go far wrong. The flow of the rooms takes you on a journey, which is no small feat given that the room itself isn’t all that big.

The room is solidly built – even the bits that are meant to look a bit more ramshackle. This might be owing to the fact that the room was only three days old when we came to play it, mind.

One of the locks was a bit fiddly to open – even when we got the right answer it needed a little bit of oomph to crack.

One thing that Escape Rooms Cardiff does really well is Moments. There’s usually a Moment in each room where you stop and go “aww yeah, that’s cool.” The Cardiff Castle had more than one of these, creating an almost cinematic experience.

All the puzzles in The Cardiff Castle were on-theme. Even the more anachronistic elements (combination locks) are handled in such a way that they’re well integrated into the setting.

There’s a good mix of analogue puzzles and well-hidden tech that provides some very satisfying a-ha moments throughout. There’s one particular puzzle I’d encountered in their Oculus room that gave me great satisfaction when I realised what we’d needed to do.

Escape Rooms Cardiff are good at subverting your expectations – we’d had our sights set on a particular part of the room for a while assuming that’s where we needed to end up. But then – surprise! – another room opens up for us to explore.

I’d have liked one more puzzle in the final room – it was incredibly well decorated and filled with detail, and we were there for a relatively short amount of time so didn’t fully appreciate it.

In this room we tackled a mix of path finding, pattern recognition, searching, lateral thinking and deduction puzzles. The signposting was on point and all the puzzles flowed well. In fact, the only time we needed a hint was because (surprise surprise) we hadn’t paid enough attention to the details in the room.

I really dug the mechanic to ‘escape’. I think the days of escape rooms being about entrapping players are coming to an end. This was a Medieval Heist (ironic, given the theme that came before), and so the endgame was thematically appropriate.

The beginning of the game didn’t have too much for both of us to do, but once we passed the first section the game opened up (literally) and there was more than enough puzzles for two of us.

Our host was Grey, who was friendly and made us feel welcome. We’d needed one hint (and a bit of confirmation on that sticky lock), which was typed up on our timer screen. It was a nice touch that the system tells you when the game host is typing – we knew we were being listened to.

Covid safety measures were solid too – we left by a different door to where we came in, we were masked up in the room the whole time, and there was plenty of hand sanitiser around.

Our team photo arrived within a few minutes of leaving the venue – Escape Rooms Cardiff have their post-game player care down pat.

The Cardiff Castle has quickly become one of my favourite escape games in Wales. With a beautiful set, wonderful a-ha moments and solid puzzles, it’s an instant win for me.

I’d hyped up the game quite a bit in my mind during lockdown, and I was delighted that it had exceeded my expectations.

If you enjoyed The Tomb and are looking for something a bit more challenging, The Cardiff Castle should be next on your list. But I think everyone will get a kick out of playing this room.

I’d recommend this game for groups of 2-3 (four maximum) as the rooms aren’t too big and bigger groups might step on one another’s toes.

This game is the closest to a Crystal Maze style experience you’re likely to get without going to the real deal. You’ll have a blast!