The Cinderella Murders – The Fairytale Files 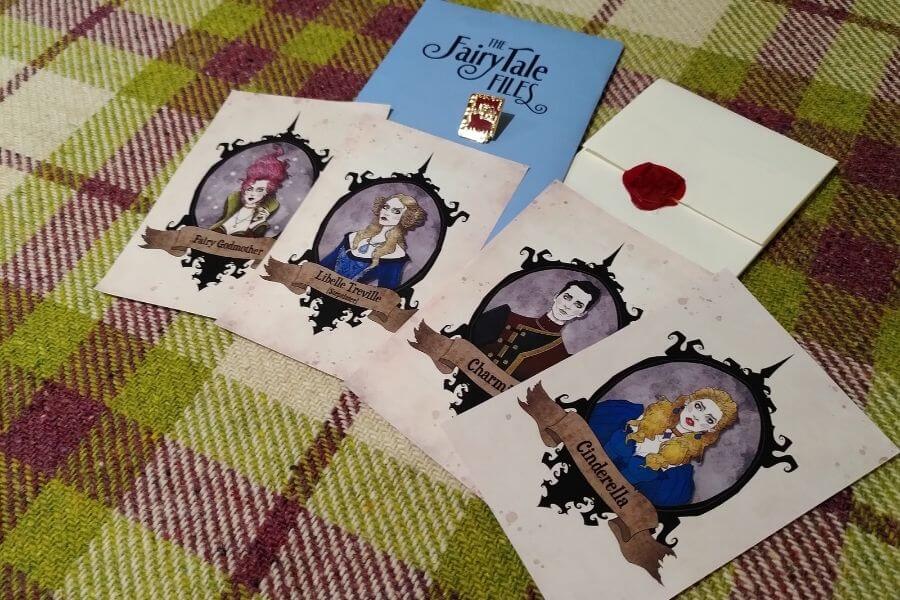 Regular readers will know that I’m down for pretty much everything that Society of Curiosities put out. Their adventures are immersive, highly detailed, fun to play and just downright beautiful.

It then should come as no surprise that when they launched a Kickstarter campaign I couldn’t hit that pledge button fast enough.

Their latest game – The Fairytale Murders – was a separate project from their main adventures, and at a lower price point. I was interested to see if these games had the same quality that I’d come to expect.

Lady Treville and one of her daughters are found stabbed in the royal gardens by a glass slipper.

The prime suspect is the mistreated stepdaughter Cinderella – she had motive and opportunity. Could it be that simple?

A beautiful game filled with whimsy

My single regret with this game is not forking out on the Deluxe Edition.

This is a gorgeous game, and maintains the quality and high production value that we’re used to seeing from Society of Curiosities, even at this lower price point.

Wax-sealed letters, wonderful illustrations of the suspects and actual evidence satisfies my need for tactile puzzling. Society of Curiosities has done a good job in mitigating the need for fewer trinkets in this less expensive game. You still feel like you get a lot of content.

I really liked the dark take on the familiar story. It’s not just that there’s a murder in Fairyland. The characters are flawed, hedonistic, jealous and downright shady. Nobody in this story deserves their happy ever after.

One thing I’d have liked to have was a physical map rather than referring to the digital one. It wouldn’t have enhanced the puzzling – I’m just a sucker for a map.

The puzzles in The Cinderella Murders are less challenging than those of their main adventure, and I liked that. It was a nice break for my brain to tackle something a little less taxing on the noggin. Don’t get me wrong, these weren’t easy by any means.

Being a murder mystery at its core, The Cinderella Murders is a deduction heavy game. But you can expect a healthy mix of deciphering, wordplay, pathfinding and classic detective skills.

One of the puzzles in particular had a secondary use that I found incredibly satisfying to solve. The multi-layered use of puzzle materials is testament to the Society of Curiosities’ attention to detail.

The use of ‘adventure cards’ to gate the puzzles allowed for a smooth flow but never felt restricted. Locations were ‘locked’ to us until we found some form of evidence that warranted us going to a specific place.

Each puzzle had solid confirmation of our solutions with reasonable answers that fit the theme.

Despite the online interface not really being optimised for mobile, it’s incredibly slick and easy to use. The messenger interface worked smoothly and without any hiccups. The AI powering the messaging system was quite intuitive. It played a lot like an old-school text based adventure (at least, that’s how we wound up using it) and the system interpreted our increasingly incoherent demands with ease.

The hint system us pretty simple – giving you three progressive hints before offering you the solution. We wound up using one or two hints along the way, but nothing that gave away any answers before we twigged .

Society of Curiosities use fancy fonts in their games to enhance immersion (and I’m all for fancy fonts). They also have the ability to read everything in plaintext, as well as have transcripts available for all audio portions of the game. This is a nice bit of accessibility that many players may appreciate.

We both really enjoyed The Cinderella Murders. It’s a perfect complement to the existing Society of Curiosities adventures and a nice mild break for your brain in between games. These games don’t skimp on production value, though. And, combined with a slick online interface, makes for a fun, fantastical fairy detective game.