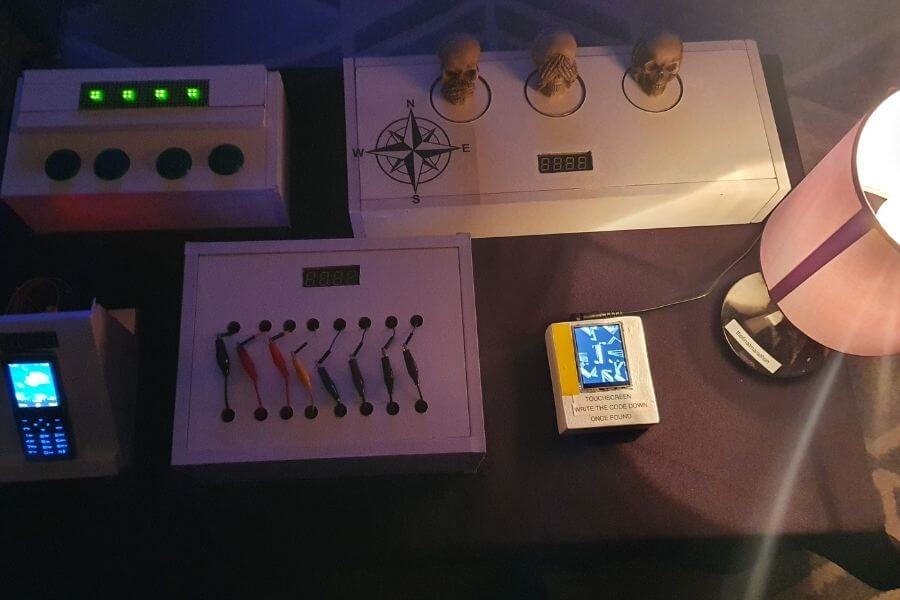 A fun, well-built game with minimal set and a good puzzle mix

I don’t enjoy being late to the party, it just happens.

Most of my puzzle pals said I needed to get on and book a slot for one of Russ’s games. The waiting list for each one was pretty lengthy.

But time ran away with me. And then Russ said he was shutting down his avatar games for good.

*cue frantic scrambling and typing to book a slot*

I managed to bag the penultimate session of Citizen, a minimalist detective-themed game that built on the success of Russ’s previous games – Endgame and Airlock.

Four Crime scenes. One thief at large. A race against the clock. Can you catch them in time?

The entire game is a labour of love. Russ has designed and built these for the sheer joy of it, and it shows. We couldn’t fault the quality of the game materials.

The game was split into four separate puzzle blocks with a central console that had the bomb we had to disarm.

The stage is minimalist and plays well to the remote avatar setting. The puzzles are laid out on a board and that is your view for the game.

The story is equally stripped back, making for a more intimate experience. The criminal known as Citizen has eluded capture up until now. They’ll hand themselves over the to the authorities if you’re able to solve their puzzles.

Having Russ as the criminal behind the camera (and barking out commands while addressing him as ‘Citizen’) was all we needed. In the absence of pageantry, what we got was a quality gaming experience.

I was impressed with the build quality of the game. Russ said that all his puzzles are built using Arduino and that he’s self-taught. It’s inspired me to have another crack at using Arduino – if I can built stuff that’s half as good as what Russ builds, I’ll be a happy puzzler.

The puzzles were accompanied by a PDF that listed the four crimes committed by Citizen. This was where the bulk of the mental heavy lifting was done, and the physical puzzles were our final inputs.

There was a good mix here – deciphering, pathfinding, logic and pattern recognition. I’m glad Mim was with me – she smashed through one of the puzzles before I’d gotten my head together (I’m notoriously bad at these kinds of puzzles).

The signposting was well done throughout. The game is non-linear but each puzzle is self-contained so we knew where we needed to focus for each section.

When our avatar presented us with the initial scene showing the bomb, we immediately pored through the PDF trying to solve that as our first puzzle. It was only when Russ kindly started to slowly pan up did we remember that there were four more puzzles to solve first. Thanks for the nudge, Russ!

We didn’t use any hints (earning a coveted place in the no-hints club).

The game focuses on a scoring system rather than being strictly about time. Every team starts with 20 points. After every five minutes of game time, a point is deducted. Also, half a point is deducted for each hint. I liked this as meant we’d balance taking time to solve something ourselves vs taking a small points hit to ask for help.

As you can see, pride got the better of us and we refused to get a hint.

The setup was straightforward – Russ sent us a Zoom link with instructions prior to the game, and we had a curated Spotify playlist to add to the experience.

Citizen was a fun, well-built avatar game, made all the more impressive by the fact it’s a one-person band who’s teaching themselves as they go. I’m sad that a) I missed out on the previous games, and b) that these remote-avatar games from Russ are now no more.

But it looks like Russ is working on something new and special, so keep a close eye on that. I imagine the line to get in will be even bigger!

Citizen
Designed by Russ Tolley
Cost: FREE (though there’s the option to leave a donation)
Duration: 60 minutes
Requirements: Computer/laptop with Internet connection, a Zoom account, a separate device that can read PDFs (optional), Spotify Premium to listen to the soundtrack without ads (optional)