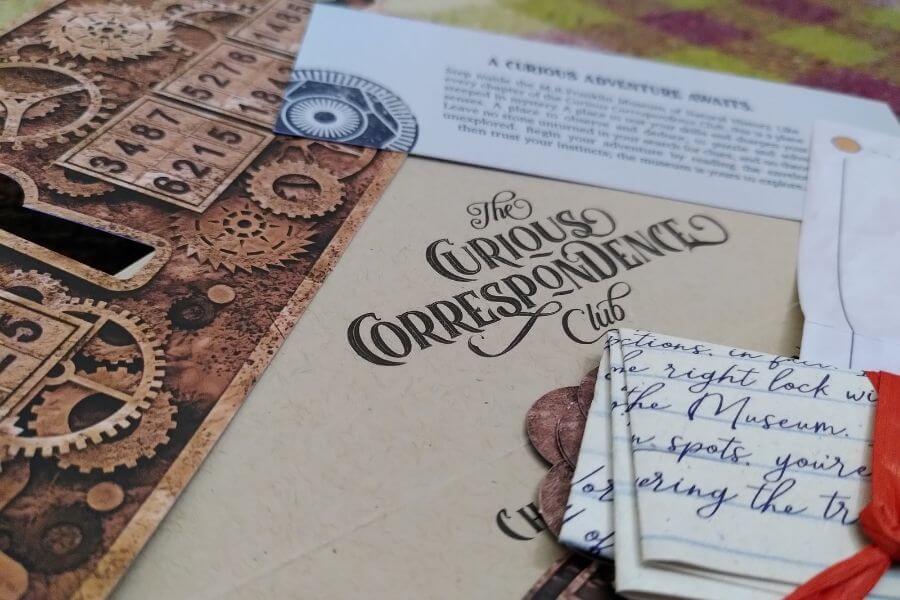 As anyone who’s spent longer than five minutes in my company knows, there are two things that I get excited about: puzzles, and history.

And any game that blends the two is something I chomp at the bit to have a crack at.

Enter Curious Correspondence Club – a Toronto-based at-home puzzle series that currently has 12 chapters under its belt as part of its subscription.

So, when three unassuming envelopes stamped with ‘Post Canada’ arrived on my doorstep, I couldn’t tear open the envelope fast enough.

We were kindly offered the first three chapters of the game to review by Curious Correspondence Club – let’s take a look at Chapter One: The Custodian’s Keys.

CHECK OUT THE CUSTODIAN’S KEYS

A museum ticket marked with a curious symbol leads you to the M. B. Franklin Museum of Natural History to investigate six keys, six exhibits, and one strange lock.

You must explore each exhibit and solve the clues to pair the right keys with the right locks. Completing this puzzle will reveal the location of an ancient treasure within the museum.

Will you be able to unlock the secrets?

A beautifully-crafted game that packs in a lot

There’s a surprising amount of content in this game, given that it all fits in a fairly small envelope. It was incredibly satisfying to slowly prise open the envelope in full before unclasping the interlocked sides to get to the goodies. It’s a beautiful game and you can tell a lot of thought went into the design of the game as a product as well as a series of puzzles.

The quality of the components is outstanding and, though entirely paper-based, still offers that satisfying tactile experience. There’s a range of textures and imperfections – some bits of paper are roughly folded and tied up, for example, to add to that sense of realness.

The artwork is of high quality and CCC makes great use of every bit of available space – all components are double-sided to reduce waste. Each puzzle component flips to reveal part of a sprawling map of the museum you’re in. And the envelope itself sets the scene with the opening story printed on the inside.

The story is one we’ve encountered a few times before – you’re locked in a museum filled with ancient secrets, and you need to peruse the exhibits to locate something specific.

What sets The Custodian’s Keys apart from other games with a similar theme is the use of the keys themselves, which add a whimsical, almost steampunk aesthetic layer. It put me in mind of something like Locke & Key – something a little anachronistic and magical within the real world.

There’s excellent signposting throughout The Custodian’s Keys. Even with the spread of materials laid out in front of us we were never in any doubt as to where to go next. The game has you solve six separate puzzles across different exhibits in the museum that then all come together at the end. This meant that the game for the most part was non-linear, but Mim and I still chose to work on each puzzle together rather than spinning off into small solo missions.

There was a decent puzzle mix – expect a combination of counting, symbology, deduction, pattern recognition, path finding and physical manipulation.

We didn’t find it a particularly challenging game, so more experienced players might breeze through it quite quickly. On a few occasions either Mim or I had worked out how to solve the puzzle before the other had finished reading the accompanying text to set the scene. We also managed to accidentally brute force the path finding puzzle through deduction, which meant we didn’t need to use one of the components in the game.

There are some pretty clever uses for the components – the keys that are the central component of the game used a cool mechanic to work out the final set of codes we needed for the endgame.

And the endgame is satisfying indeed, using a puzzle type that I thoroughly enjoy. It was a solid puzzle to end on as it brought all threads together and gave me my Indiana Jones moment, which is all I really want in life. Then again, isn’t that what everyone wants in life?

We used one hint to give us a steer on how to use the lock component, and after a single nudge we were off without any problems.

The hints are the standard ‘two nudges and a solution’, broken down by component which isn’t anything to write home about. The hint system does also offer a full walkthrough if you’re really stuck or overseeing younger players, which is nice.

There’s a really nice epilogue video to the game once you’ve figured out the final solution, and it’s something I wish more at-home puzzle experiences would do beyond the standard ‘you win!’ messaging. It maintains the adventurous and mysterious tone of the game, ends on a high note and teases the next chapter really well.

A note on sustainability

You could quite easily regift this game to a friend to increase its longevity. You will need to physically manipulate one of the components, which might make things a little easier for the next group, but nothing I’d call a dealbreaker.

There’s one part of the game where you might be tempted to draw on it to make solving easier. I was hesitant to do that, more so because I didn’t want to deface such a great looking game. So long as you rein in that impulse, you should be okay. Take photos of the materials and draw on the screen instead.

The Custodian’s Keys: in summary

The Custodian’s Keys serves as an excellent introduction to the Curious Correspondence Club universe. It’s got a wonderful visual aesthetic, fun puzzle mechanics and smooth, satisfying game flow. I feel like I’m now a part of that world, and am definitely hooked into playing the next chapter.

If you’re on the fence about getting a subscription, getting this as a single chapter is a good way to see if you gel with the game. More experienced players might not be challenged all that much, but it’s a lot of fun to play.

I’d recommend this game for fans of Post-A-Puzzle and Puzzle Post UK that want a richer narrative experience and a greater sense of grandeur.

CHECK OUT THE CUSTODIAN’S KEYS

previousWizard’s Study – Escape Blackwood
nextFree Puzzle: What shall we play next?