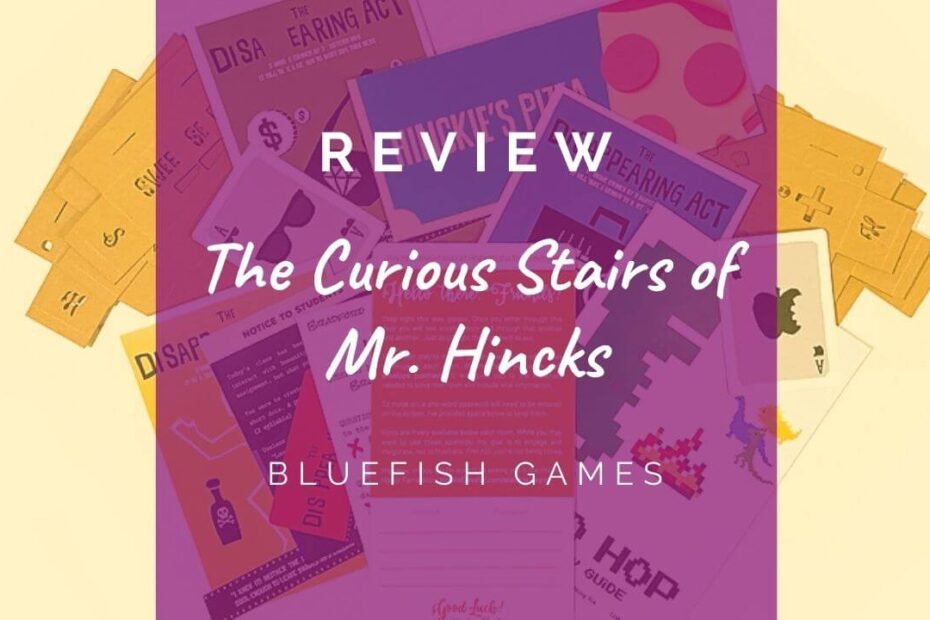 A fun and refreshing challenge that’s bursting with creativity.

The Hincks-verse has built a reputation on challenging, offbeat and creative puzzle games. I’m a fan of both The Curious Elevator and The Hincks Gazette, so I was chomping at the bit to give this prequal a whirl.

Go back in time and meet a pre-elevator Hincks in this prequel game. Solve enigmas by pairing mysterious physical materials contained in this cryptic parcel with clues from the online interface.

Verify solutions online as you climb the steps to the Hincks Hall of Fame.

The experience of playing in the Hincks-verse is one of eccentric delight. The tone of the game is light and things make most sense when they don’t. We put on the Gravity Falls soundtrack while we played – mystery and silliness in equal measure – which was a perfect complement.

In an industry filled with high stakes and dramatic narratives, it’s a breath of fresh air to play a game that has its tongue quite firmly planted in its cheek. The voice of Hincks himself – both in text and in audio – uses the kind of quirky language that reminds me of Willy Wonka.

Come to think of it, I should have put on the Willy Wonka and the Chocolate Factory soundtrack instead. Damn.

Bluefish Games’ main strength is the creativity of their puzzles. Almost everything in Stairs I’d never seen before in a puzzle game. They even took one of my least favourite escape room puzzle types and turned it into something thoroughly enjoyable through clever use of the components.

As almost all of the puzzles are based around wordplay, there is a tendancy to rely on anagrams to shroud some of the answers, which delayed the confirmation that we were on the right track. Anagrams are my personal puzzle kryptonite, so I just used an online solver.

This game was tough – tougher than The Curious Elevator. We spent nearly 30 minutes on the first puzzle, largely because we needed to reconfigure our brains to not think like traditional puzzlers.

That being said, the signposting in Stairs is excellent, provided you keep an open mind. Even the most seemingly bit of flavour text usually contained something to steer us towards how to sovle each puzzle.

Every floor of the Stairs has its own graded hint system. And the hints are quite granular, allowing for gradual enlightenment rather than being spoonfed the way to win. We used a few hints to steer us in the right direction, particualrly on the first and last puzzles.

Those who complete the game are able to earn a spot on the leaderboard. Places on the board are chronological according to completion date. Being in the UK, I always feel ever-so-slightly cheated when I see 40-odd other names before mine. Stupid Atlantic Ocean.

The Curious Stairs of Mr. Hincks was a joy to play. It’s filled to the brim with good humour and a wonderfully light tone that’s refreshing to see. There’s creativity abound and it was able to breathe new life into some tired puzzle formats.

Don’t let the fun visuals fool you though – this is a challenging puzzle game. I recommend you play The Curious Elevator first, or cut your teeth on some issues of The Hincks Gazette, before attempting to climb the staits.