Escape from the Cursed Galleon – Roomination 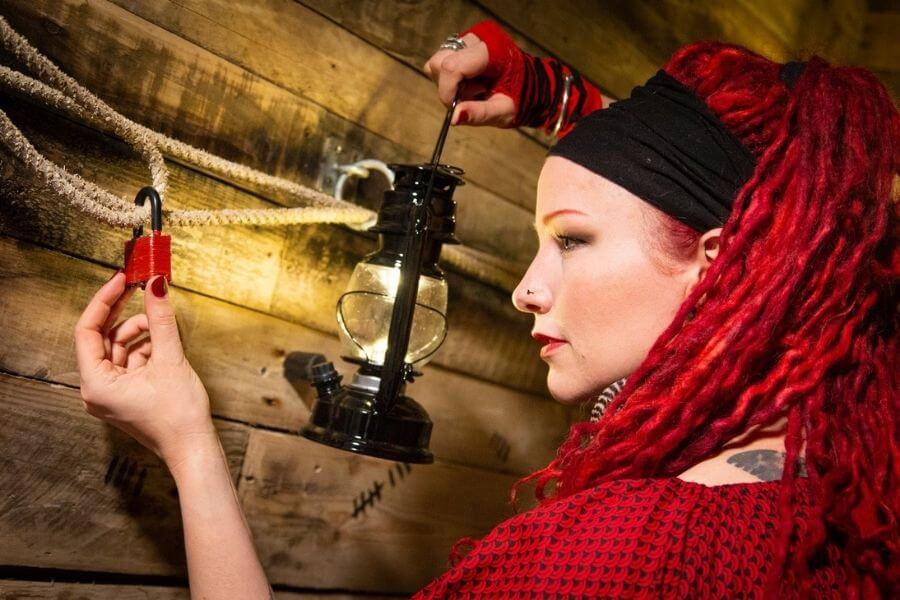 A great room for salty seadogs and landlubbers alike

This was a wild night.

Roomination, right up in the top end of Powys, is located inside an old Victorian workhouse.

I went up there for the weekend to take part in an overnight ghost hunt alongside paranormal investigation group Powys Paranormal.

We stayed there until 2am, and though we didn’t see any ghosts, their equipment picked up a couple of anomalies here and there.

But the kicker for me was that the event also included a session at Roomination’s pirate-themed game – Escape from the Cursed Galleon.

Book Escape from the Cursed Galleon

Whilst sailing the seven seas on a quest for fame and fortune, your ship gets raided… by pirates!

A skirmish breaks out and despite your best efforts, the pirates board your ship and plunder your treasure! You try to keep your ship together but it’s too late, you’re knocked unconscious by one of the scallywags.

On awakening, you find yourself locked in the brig with a few of your crew mates on board the enemy’s galleon. To your surprise, there appears to be no-one else on board… alive. All you can hear is the distant rumble of a fast approaching storm.

Can you break out of your cell, steer the ship to safety and find your missing loot all before the time runs out?

The workhouse is a rather unassuming venue, and the escape room takes up quite a small chunk of it.

But all that went out the window once we stepped over the threshold into the room.

Escape from the Cursed Galleon is wonderfully decorated, and played to its relatively small space well as you navigate through tight quarters in the bowels of the ship.

The core ‘escape’ concept was actually split into four objectives – break out of the brig, navigate the storm, find the treasure, then escape the galleon. This milestone approach meant that we had a decent measure of our progress rather than constant panicked glances at the timer.

The room is largely analogue, as it should be considering the piratical theme of the game. Secret panels and physical manipulation of the room made elements of discovery and reveal all the more satisfying. There was precious little that just ‘popped open’ – we made everything happen.

Plus there were portable lanterns for extra light, which was a lovely touch.

There was one portion of the game that needed to rely on tech and, while it was fun and tongue in cheek, there was no way to shy away from the fact that it was a little immersion breaking, and a little bit of a time sink.

Riddle me timbers with a diverse range of challenging puzzles

There was a pretty diverse mix of puzzles in Escape from the Cursed Galleon. Expect a mix of maths, pathfinding, searching, and pattern recognition.

There were also a couple of dexterity-based puzzles that fit the theme really well and channeled our inner sea dogs.

And, I might smugly add, I finally did a a maths puzzle in my head and got it right! The curse has been lifted!

The puzzles got more complex as we ventured deeper into the game. The brig at the beginning was largely dexterity-based, and by the time we got to the captain’s quarters it became more cerebral.

There was great signposting throughout the game – much of it in plain sight – and enabled us to maintain a good pace of solving. At no point were we stuck with what needed to be done next.

We made the mistake of thinking that once we’d cleared a room we were done with it. Not at all. There was a decent amount of back and forth between all three areas.

There was nothing too in challenging in this game, though we needed two hints because our observation and memory skills were poor.

Looking at the victory times posted on the wall outside the game, most times were were in the final 10 minutes. So there’s a decent amount for even seasoned puzzlers to get on with.

Bonus point booty for the win

The hint system and opening exposition was delivered via screen in the brig. We asked for hints by ringing a large bell in the middle room, which was very cool.

As well as our escape time, we earned points based on time, hints used and our general progression throughout the game.

We were also able to earn bonus points for doing particularly piratey things (we managed to earn them all in quick succession due to some enthusiastic celebration after solving a puzzle!)

We were able to write our team name and escape time on the wall outside the room to commemorate our our victory too.

A great room for salty seadogs and landlubbers alike

If you’re in the area, I highly recommend you play Escape from the Cursed Galleon. Our team of four was a good number to tackle the room, though I’d say that’s should be the max. I’d say a duo of experienced players could take it on in time too.

And when you’re there, see if you can find the Armchair Escapist logo!

Book Escape from the Cursed Galleon

Prices start at £15 per person