Mystery City -A Death in the Red Light [REVIEW] 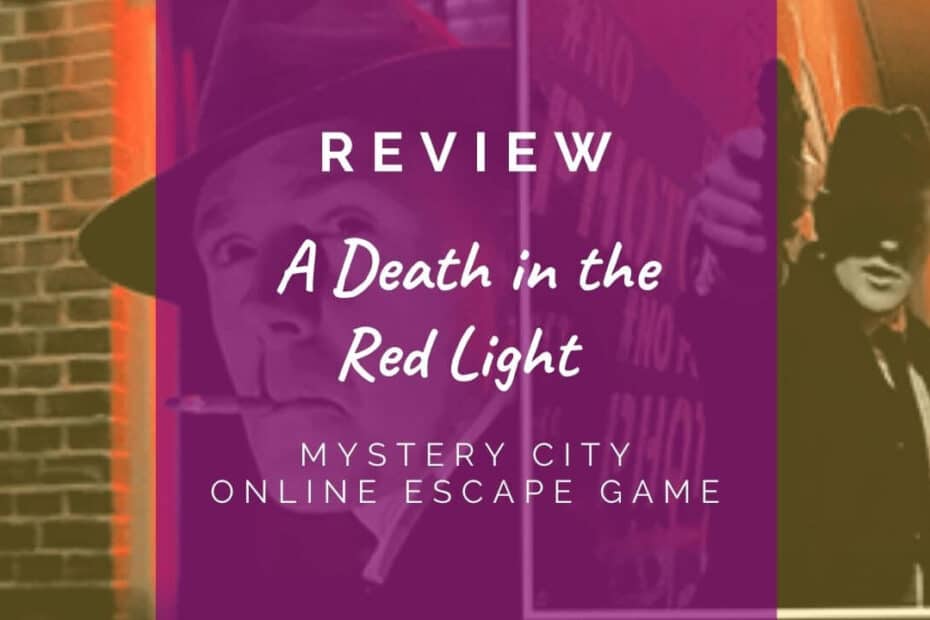 A wonderfully polished game that blends the play-at-home escape experience with an interactive noir detective novel.

Who doesn’t want to be the lead in their own noir detective story? I sure as hell do. And I’m a sucker for history. That’s why I was intrigued by A Death in the Red Light, a puzzle game/ interactive detective story that takes inspiration from a real case to pull you in.

The city smells of sex and drugs.

A detective walks the streets, with whiskey on his breath and a gun by his side.

Another night, another dead body bathed in the red light,

Follow the clues, chase the leads and connect the dots to solve the case before the trail goes cold.

Even though the game is set in 1988, there’s a noir veneer that overlays the aesthetic. You’ve got your world-weary gumshoe trying to bust the case wide open. Drug lords. Prostitutes. And a whole lot of jazz.

The noir theme was well executed and mostly consistent. The main character’s voice comes through well throughout each step of the game. Reading out loud, you can’t help but slip comfortably into a faux Humphrey Bogart.

Some elements did kind of pull you out of this, though. One part is designed to look like a video game – while this makes sense in the 1988 setting, under the noir theme it’s a bit jarring and breaks the spell a little.

The game comes as an interactive PDF, which is a new format for me. It worked really well, on the whole – each page of the game was a ‘case file’ that you could come back to at any time. Central to the game was the map that allowed you to ping to any location at your leisure.

This helped cement the detective/gumshoe aspect of the game and helped to pull us into the world. But not everything worked as intended – the ‘previous location’ button never worked for us, which meant we had to go back to the map every time we needed to switch back and forth.

The game blends the online puzzle experience with a traditional detective game really well. The puzzles themselves are pretty non-linear, and it’s through your detective work that you can slowly work your way towards the end goal.

The puzzle mix was pretty good, though there was a slight emphasis on more logic-based puzzles to tie in with the detective theme. These were varied enough that nothing seemed too samey, though I’d say this game leans more in the direction of detective game / choose your own adventure than straight up puzzle game.

All puzzles were signposted well and nothing was overly-challenging. A few puzzles relied on information we’d picked up from earlier in the investigation, and it was most satisfying to see the threads come together.

Part of the detective work involved interacting with the police computer, where you’d input names to get more information about certain suspects. This was a nice additional level of interactivity that made you feel like you were engaging with the real world a bit more.

The hint system is built into the police computer, so you’re only given a sliver of information that’s relevant to the particular case file. Each case file gives you a hint, followed by progressively detailed walkthroughs if you ask for them.

We used one hint towards the end, which pointed us towards a lead we hadn’t yet followed. Once we’d picked up that particular thread, the rest was a cake walk.

It was also fun to know that we were dealing with a real historical case. I think we learned something about Amsterdam that we didn’t know before, and the reveal at the end was made kind of bittersweet knowing that it came from real life.

A Death in the Red Light is a wonderfully polished game that blends the play-at-home escape experience with an interactive noir detective novel. I’d recommend this for someone wanting to take their time and absorb themselves in the story so they get the most out of stepping into the street-worn shoes of the detective.

A Death in the Red Light
Designed by Emilie Mendes de Leon and Geert Sillevis
Cost: €15 (currently €12 as a launch offer)
Duration: 120 minutes
Requirements: Laptop / computer. Pen and paper could come in handy, as is the ability to take screenshots.

Play A Death in the Red Light