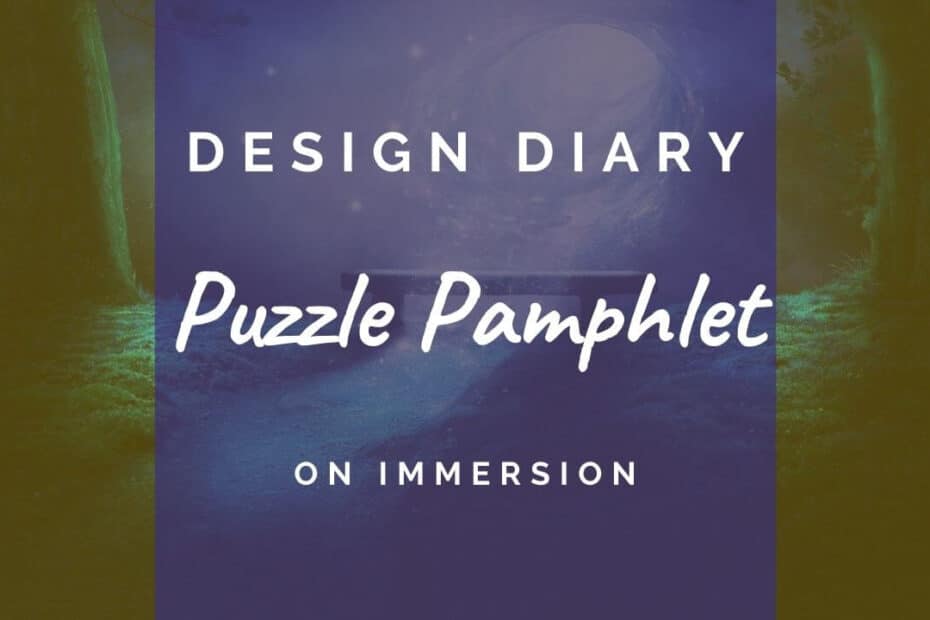 How one of core elements of the puzzle design had to go to make way for a believable world.

Here I’ll talk through my though processes, highs and lows of designing and creating a escape-adjacent puzzle experience I’ve dubbed the Puzzle Pamphlet. It’s one of my 2020 goals to get it published before the year is out.

When I originally conceived of the Puzzle Pamphlet idea, I had it pretty straight in my head that each issue would feature 10 puzzles. Each puzzle would give you a word, and you’d fill those words in on a grid to give you the final answer, which you’d check online.

The provblem is, how does any of that fit in with the late Victorian theme I was going for? If someone is hiding codes and clues within a pamphlet – and hiding them well – a random crossword would kind of stick out like a store thumb.

And while going online to check your answers is a staple in puzzle games, it completely shatters the illusion that you’re in the 19th century.

So either the theme has to change, or the puzzle design.

First off, having 10 completely disparate puzzles and filling in a grid at the end felt a little … lazy. The puzzles wereren’t just hidden – they were buried. Unless you were familiar with that particular puzzle type, you might never spot it.

That’s not a brag, that’s a design flaw.

So the 10-puzzle sequence was ditched in favour of 6 puzzles stretched across the whole set of ephemera in the issue.

This gave me breathing space to (and literal space) to add flavour and character. It also let me properly signpost puzzles and add more than one layer of puzzle solving.

At the core now sits a light deduction mechanic. Each puzzle you solve gives you a word. That word is used to narrow your pool of inquiry, Guess Who? style.

Adding a touch of the modern

I knew I wanted – and needed – some level of online interaction, but this wouldn’t work in Victoriana game, suspension of disbelief or no.

So I decided to frame the whole thing around a fictional British town and it’s archival society who’ve uncovered a bunch of Victorian-era cold cases that need solving.

An introductory letter from Professor Ian T Errol* (who features in all of my puzzles – bonus points if you spot the sweet, delicious pun) is the modern component, and the collection of ephemera is Victorian.

This allows the player to ask for hints and verify answers online (probably via email/Messenger with ‘Ian’) without disrupting the established world.

I like to think so. I’ve not even begun alpha testing of this thing yet, so things make take a turn as soon as I do. But I’m in a happier place with it. The puzzles make more sense. There’s a bit more room for story building. And I can introduce more modern components with ease.

Hopefully my next design diary will be all about playtesting once I start showing it to folks!

How important is the sense of immersion for you when you play an at-home puzzle game? Get in touch and let me know!

* He always signs off his emails as Prof IT Errol