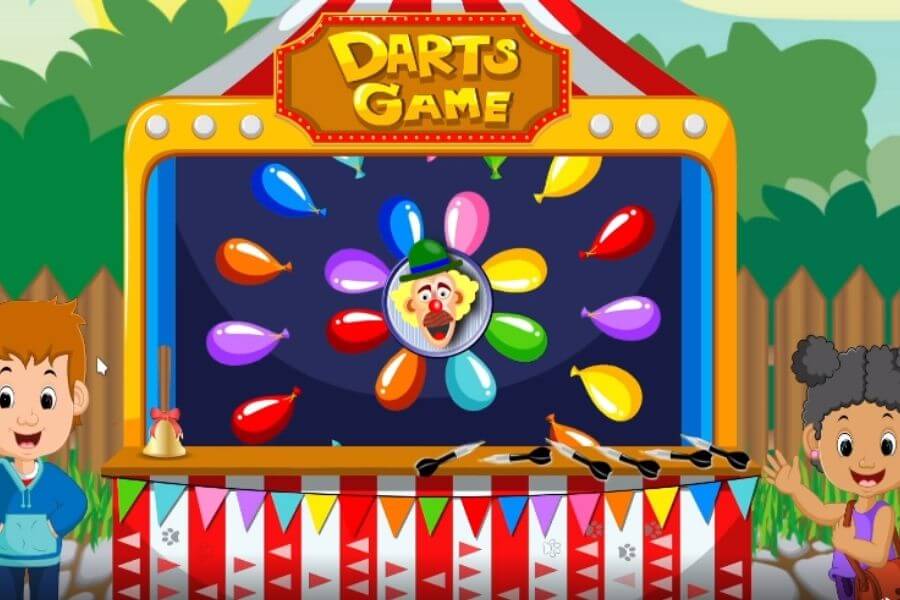 Way before escape rooms were a thing, I cut my teeth on playing point-and-click puzzle games like Monkey Island and Broken Sword. Somewhere along the way I lost touch with these old-school games.

When I heard that Carnival by Edaqa’s Room rekindled that same feel, it was a no-brainer – I had to give it a shot.

The Carnival is coming and you’re definitely going!

Rumour has it that a secret society is hiding there, luring potential members with puzzles spread over the fair grounds.

Come; show your mettle; beat the carnies at their own games.

A soon as we booted up the game we said “this reminds me of an old Flash game”, and that’s very much to Carnival’s credit. The illustration style and point-and-click nature of the game gave us nostalgic vibes of playing (way too many) Flash games in our teens.

As you’d expect with a fairground theme, the colours are bright and vibrant and there’s appropriately sunny background music to go along with it.

I was very grateful for the latter – when searching for ‘fairground music’ on YouTube you get two choices: Creepy carnival soundtrack, and Simply Red’s ‘Fairground’. I’m not sure which of those two options is more terrifying.

The point-and-click interface worked well and gave us same sense of search and discovery that’s present in live escape rooms but hard to replicate in a home setting.

A couple of times the game would lag and some interactions would be slow to register, but they weren’t overly irksome.

Puzzles: Not much diversity but some really creative solves

You’d be forgiven for thinking that the bright colours and simplistic illustrations meant this was a kids game. Not at all. There are some challenging puzzles in this.

The lion’s share of puzzles revolve around a common puzzle type in various guises. While this didn’t get tiresome, it was noticeable and it was a shame there wasn’t more diversity in the puzzles.

That being said, there were a couple of puzzles in there that I’d not really come across before, and I had great enjoyment in working out the solution. It’s always a good thing when a puzzle makes you feel smart, and that’s what I got.

Most puzzles are self-contained with each area of the carnival, but a few require you to explore the space a bit, which I enjoyed.

Once we’d gotten to the final part of the game, we were encouraged to go back and collect all the easter eggs (literally – we’d found a couple of Faberge eggs after solving some puzzles that spanned multiple parts of the game.

Given my completist mentality, I knew we couldn’t rest until we’d 100% completed the game.

The hint system is nice and simple – your in-game notebook clues you in on which puzzles are contained in each scene, and gives simple hints to nudge you along.

Your interface also has an inventory so you can keep track of relevant items and automatically greys out items you no longer need.

Beneath this seemingly simplistic exterior, Carnival has some solid puzzles and good puzzle flow. Appropriate to the carnival theme, anyone playing this game is in for some good clean fun with a light, bright storyline. I’d recommend this one be played with two or three players (four if there’s more than one device).

Play Carnival
If you decide to play Carnival, let them know that Armchair Escapist sent you!