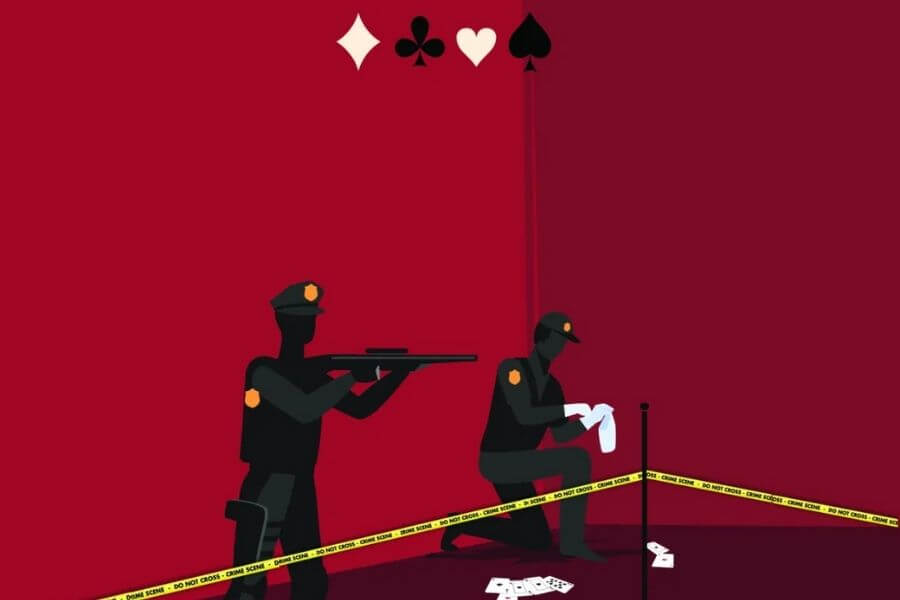 Solve a crime wave and learn a new card game? Sign me up!

I had a lot of fun with Enigma Fellowship’s initial game – The Lost Knowlege. It was a lightweight game that had a surprising amount of depth to it.

I was interested to see how the second adventure in their series – The Scattered Cards – held up.

And it was just as fun.

The Sonnburg Police Department has been investigating mysterious disappearances of citizens in the city for the past few weeks. The case has only taken a turn for the worse now that a Police Officer has turned up missing as well.

The only connection seems to be random playing cards received by each victim before they vanished. The Enigma Fellowship has been brought in due to our expertise in code breaking.

Can you solve the enigmatic puzzle of the scattered cards and find these kidnapping victims before something untoward happens? Can you apprehend the perpetrator? Lives depend upon you.

Simple components and a strong narrative

The components of The Scattered Cards are mostly paper-based e.g. letters, email printouts etc. The componants are simple and help keep the game’s cost accessible.

The game’s centrepiece – the cards themselves – are slightly adapted playing cards,and having the real prop in the game adds a bit more realism to the case.

There were one or two components would have worked better as an online element for added immersion in the sleuthing department, but worked just fine as a print-out.

As with The Lost Knowledge, The Scattered Cards uses a ‘nested doll’ approach to its storyline, where each casefile contains a smaler sealed envelope that you need to ‘unlock’. It’s an elegant approach to having gated puzzles that allows you to recreate an escape-room experience at home. I really enjoyed the discovery of opening up an envelope and discovering more locked doors within.

The online component is used for password entry and narration. The audio and text narration is good and serves to provide the cinematic context to what you’re doing. As with The Lost Knowledge, we got a little impatient with the exposition (there’s a lot of it). At a few points the game even tells you not to look ahead until the narration is done, but as we were on the clock we couldn’t help ourselves.

The Scattered Cards walks the line between puzzle game and detective game, and does it well. There were enough puzzles to satisfy our escape-room brains and the overall narrative had us zone in on the suspect in a satisfying way.

The playing cards are used to their full potential – being offered to us piecemeal to unlock certain leads, and then brought back together towards the end to help with the final puzzle. I enjoyed coming back to them and building up our deck as we progressed through the game.

The Scattered Cards rewards paying attention to the detail, and there was enough depth for two of us to work through the puzzles together without stepping on each other’s toes.

The first half of the game is non-linear and case files can be tackled however you like. The challenge is not to open them all and become overwhelmed by the evidence (we may have done that …)

The Scattered Cards uses a graded hint system for each case file. We used one or two hints along the way when the wealth of material we were looking at overwhelmed us a little bit. But we were back on track in no time.

The game also has ameta puzzle hidden in it. So far (as far as I know) nobody’s cracked it. But I’m going to give it my damnedest.

There were some nice throwbacks to their first game – The Lost Knowledge and some meta cameos from the creators themselves.

The Scattered Cards is a great game that’ll be fun for puzzle fans as well as would-be detectives. The puzzles are challenging and there’s an enjoyable mystery to solve. If you’re a fan of true crime, this should be a good game for you.

Teams of 2-4 I think would work well for this – the separate case files makes it perfect for a small group to sink their teeth into.