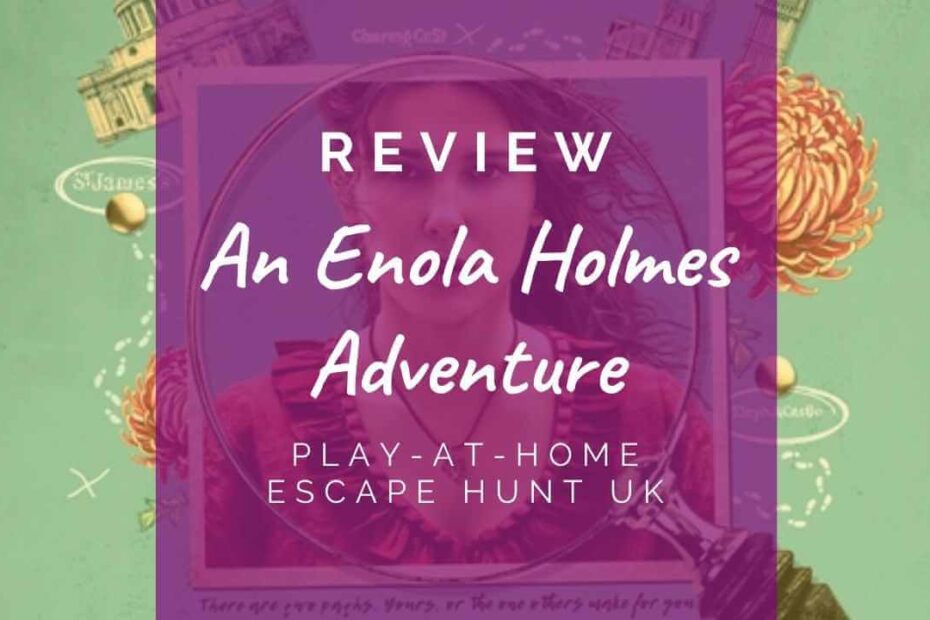 The game is afoot in this wonderful tie-in to the Netflix adventure.

As soon as I saw the teaser trailer for Enola Holmes, I knew it was going to be a must watch. Millie Bobby Brown as a 19th century detective, all the while spouting sass and giving fourth-wall breaks? Where do I sign?

And when Escape Hunt announced they’d created an official print-and-play puzzle game to tie in with the film, I had the same reaction.

So we settled down with some popcorn to watch Enola Holmes (which we really enjoyed) and then got stuck into solving An Enola Holmes Adventure.

The game is afoot! Players have the opportunity to join Enola Holmes’ new detective agency – if they can prove their skill as detectives of course. Individuals displaying intelligence, bravery, and a degree of cunning are highly desired for the post.

Armed with only a map of London, a newspaper, and your wits, chase Enola investigating iconic locations including Covent Garden, Bond Street and 221b Baker Street.

The game revisits many locations seen in the film, dropping you straight into Enola’s world and giving nods to key scenes and characters in the film.

I really enjoyed the vibrant visuals of the game. All to often with print and plays – especially historical ones – there’s a tendancy to rely on washed out sepia tones.

That isn’t the case with this game. Much like the film it’s based on, An Enola Holmes Adventure is bright, colourful and bold. The aesthetic is perfectly tied into the visuals of the film so you’re able to jump straight back into that world.

It’s suggested you use a colour printer and I would agree. I don’t think it’s vital in order to solve the puzzles but you really do get more of a visual feast.

There was a slight disconnect in the use of 19th-century style illustrations and stills from the film itself (unavoidable given that it’s a promotional game) but it the more modern looking images weren’t overdone.

I really appreciated the snippets of historical fact on certain locations, people and historical events. It helped flesh out the world of Enola Holmes even more.

The two core elements of the game were the map of London and the newspaper. The map is merely there as a progres tracker of what puzzles you’ve (I didn’t print it off to save ink).

I really liked using the newspaper, which you’d refer back to several times througout the game. It gave me the feeling of playing Sherlock Holmes: Consulting Detective, which is spot on, given the theme.

There was a good puzzle mix here, with deduction, manipulation, assembly and maths puzzles making an appearance. There were one or two puzzle types that on the face of it would have seemed out of place, but the game did a good job at weaving them into the world so that they made sense.

Nothing was particularly challenging (apart from one puzzle that I blame on my fat thumbs), but all of the puzzles were well thought out and well signposted through snippets of dialogue sprinkled throughout the pages.

There was enough for the two of us to get on with, despite only being able to solve one location at a time. We were able to work together well in solving each puzzle – only at two points did we tackle a puzzle solo due to our particular strengths in each puzzle type.

The game was pretty linear,overall- once you’d finished a page, you didn’t really need to come back to it until the very end.

This helped maintain the pacing of the game, flinging you across London at the same clip Enola herself goes at in solving her own mystery.

I’d have liked a little more poring over the materials to give a bit more of a challenge. The newspaper did a good job of this, and I’d have liked to have seen more.

We didn’t use any hints. But the hint system was well crafted (hints are written on a separate sheet and in reverse, needing a mirror to decipher them). It’s a simple hint method that’s in keeping with theme and is quite difficult to spoil anything for yourself.

An Enola Holmes Adventure was a load of fun. The game perfectly encapsulated that spirit of light-hearted adventure that made the film so enjoyable.

I’d recommend this game to anyone who likes the film and wants to have a crack at solving their own mystery. I’d say its challenge level is better suited to families, but it makes for an excellent way to round out movie night for anyone.