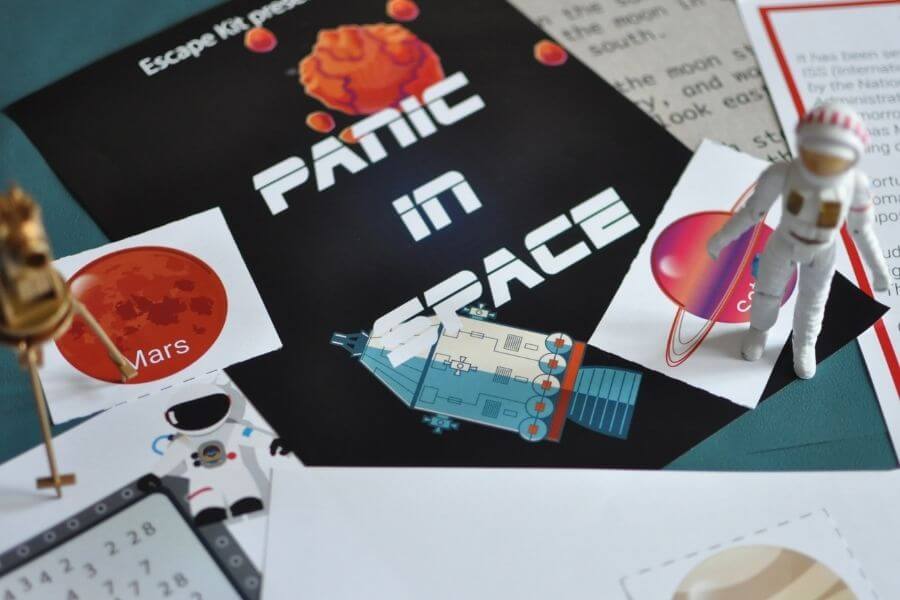 I really like the idea of turning your house into an escape room. Especially in 2020, bringing the escape experience to your home is all the more important. And a number of games have sprung up to answer the call. Hell, I’ve even designed one myself.

Escape Kit have a number of game themes, mostly aimed at kids. We opted for Panic in Space, since it was designated ‘intermediate’ and it’s not often you see a space-themed puzzle game.

We set up the room, put on some Hans Zimmer and counted down to lift off!

You have been chosen by the National Aeronautics and Space Administration (NASA) to become the astronauts of tomorrow.

With you is the Great American astronaut, Thomas Miller. He is in charge of your training during this trip.

Unfortunately, Thomas came back from a spacewalk of several hours very weak, and ended up fainting… It’s impossible to wake him up… Suddenly, an alarm goes off!…

The central part of the game was a simple computer interface where you’d input your answer. Each correct answer would reward players with a suitably sci-fi gif and a bit more information to further the story. It was fun, but it kind of broke any semblance of immersion.

The game is neatly divided into parts of the space ship, meaning you could sprawl the whole game across your house to make your players go room by room.

Overall, the artwork is inconsistent – you have high quality illustrations on one bit, and what looks like clipart on others. There’s not much to tie everything together other than ‘space pictures’.

Once or twice we spotted something that looked like a typo. But on closer inspection it appeared to have been something that was not translated from the original French game.

The puzzles can be solved in any order, but you have to input the answers into the computer terminal in the correct order.

There’s a mix of deciphering, stenography, physical manipulation and logic puzzles. The ‘mission log’ offers initial clues as to how you go about solving each of the six puzzles. These were mostly quite useful, but one in particular didn’t give us any help.

There was one puzzle where we didn’t see how to solve it until we looked at the answer, and even then we thought “we’d never have seen that”. The solution bordered on requiring outside knowledge. Without any kind of signposting, we’d have never seen what we needed to see to get the solution.

One puzzle was a maze but there were multiple routes around it to get to the end. There’s an extra layer to the image but it felt like a waste in that you didn’t really need to solve the maze.

One of the later puzzles had a few layers to it that we quite enjoyed, and involved a little bit more back and forth than the previous puzzles.

We used a few hints and a solution on the one puzzle mentioned earlier – the hints didn’t tell us anything that would help so we needed to just get the answer.

The game offers you the option of a partial solution, which I did like.

As well as the puzzles, the game kit comes with a few decorations that you can print to serve as props, a certificate and a suggested playlist for added atmosphere. These little touches were nice and would serve as a good extra for a kid’s party.

There were some nice puzzles in this, but overall I felt wanting more at the end of it. As it’s a game designed largely for kids, I can see them enjoying it for the most part. Portioning off parts of your house to serve as different parts of the space ship would help add to the atmosphere.

But there are more polished games available for a lower price, and with more content. At almost €20, you can get more bang for your buck elsewhere.