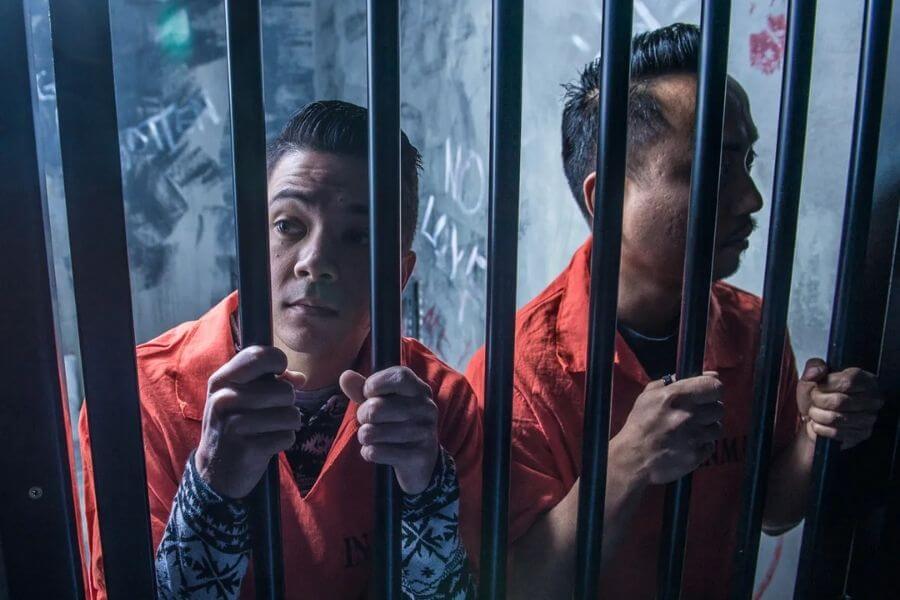 I have a score to settle with Escape Reality. Before attempting Alcatraz, I’d only won a single game, and had lost two (but I blame that on the pre-game drinks we had that day).

So when the opportunity came to book an escape room for a work’s event, I knew where I had to go.

You are all masters of escaping and no prison has managed to contain you. As highly skilled individuals you have been plotting your escape plan and now the time has arrived.

A diversion has been caused by other inmates and the warden has sprinted off to help, leaving you in your cells unguarded.

This is your prime opportunity to make your escape attempt. Can you escape before he returns and catches you?

As with all the rooms at Escape Reality, Alcatraz has a high production value. There were some great “a ha!” moments when we went from one room into another – it felt like the scene in Willy Wonka when they go from a tiny corridor into the chocolate room.

The decoration was as expected for a prison, and all the elements were appropriate to the theme with no extraneous elements. Escape Reality do a good production, and it felt like an old part of Alcatraz itself.

Of course there was a costume of sorts, and I wasted no time at all in putting that straight on. Never miss up an opportunity to dress up in an escape room!

Being split into two teams, we managed the first few cooperative puzzles rather quickly. Things went a little blurry after we reunited as the solution for one of the puzzles seemingly came out of nowhere from one of our team.

Many of the puzzles in Alcatraz were multi-step. Use this diagram, add a bit of maths, follow it up with a splash of pattern recognition and you’ll have the shape of the numbers that make up the code.

It’s the kind of thing that completely melted my brain at first (looking at you Fibonacci), but I think I had a good mix of people in our team to take on various aspects of the puzzles.

Another element of the puzzle mix that I appreciated was the use of the Escape Reality key – a large metal key that has the logo of the venue as part of the metal. Using this gave one of the locks a very physical edge – like opening a vault door – which was very satisfying.

Our host Fayth was great from beginning to end. As I’d booked three rooms, we had a large group to juggle, but she handled our rowdy lot well. Her and the other games master (who’s name I didn’t catch – sorry!) were friendly and fun throughout.

The hint system, was a different matter. Escape Reality uses a unique hint system via a tablet and QR codes dotted near various puzzles. Although they can see us, the game masters don’t get involved unless absolutely necessary.

The tablet hint system rarely works as intended, and the stock hints/solutions offered didn’t give us any more insight into the puzzle than we already had. This hint system lets down all the rooms in Escape Reality, as it loses that personal connection with the GM, who can usually tailor clues to suit your play style and progress.

We escaped and then some! Our group broke out with 8 minutes to spare. If we’d had all of the elements to the final puzzle, it would have been a lot sooner.

Alcatraz is a well-produced room with good puzzle diversity. The overall experience is ultimately let down by the sub-par hint system, but the room itself is good quality.

I’d recommend this room for larger teams that have a few escape room victories under their belt – you’ll need every brain in the room!