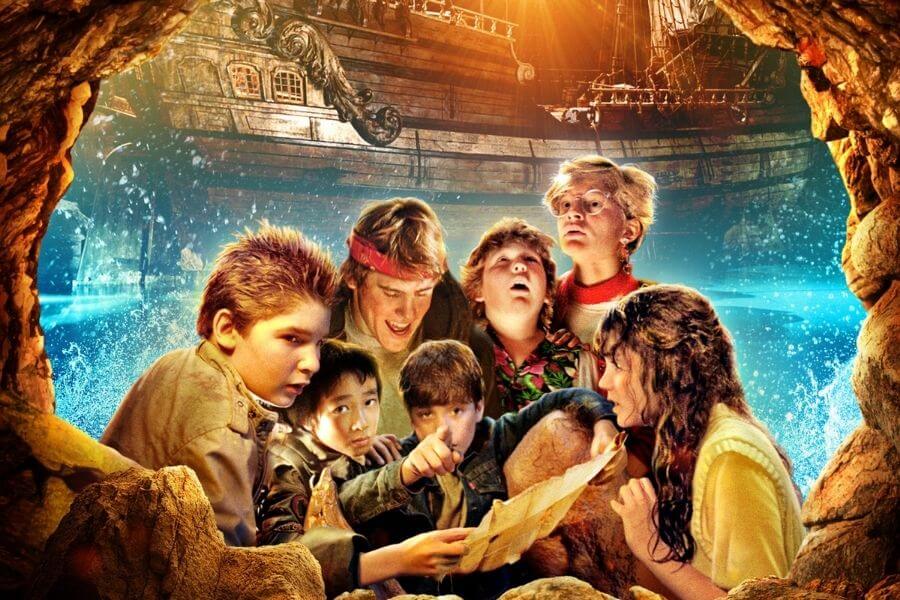 Who’d have thought the common escape room personalities are basically The Goonies?

You wrangle your smartest friends to try out an escape room. Right, your inner monologue begins, these are the nerdiest people I know. Success is guaranteed!

Except that’s not what happens. You hit the first puzzle that doesn’t rely on logic or maths, and you hit a brick wall. Cue 20 minutes of screaming and arguing before severing ties with your so-called friends forever.

Variety is the spice of life, and so escape room success requires a mix of different personalities. And, coincidentally, these personalities match up almost seamlessly with characters from The Goonies.

Of course, you’re unlikely to get a group of people that fit all these archetypes neatly. And if you’re in a team of two or three, you’re going to be pulling double or triple duty to fit multiple aspects per player.

But these archetypes should hopefully help you if you’re looking to pick your teammates for your next escape. And it gives you an excuse to watch The Goonies again, and who doesn’t want that?

Is this just an excuse to talk about The Goonies?

The communicator aka Mouth

In The Goonies, Mouth is an obnoxious loudmouth who doesn’t know when to shut up.

Ironically, in an escape room, over communication is a useful skill.

The Mouth of your group is going to yell out every lock they see, every code they find, and regularly take a verbal inventory of the room.

This will keep everyone in the room clued in on what puzzles they have left, and what they should be looking for.

The brains aka Data

Data is the luckless inventor whose gadgets have a low success rate. He’s arguably he smartest Goonie of the bunch.

In your escape room, you’re going to need someone who’s able to tackle those problems that require an attention to detail and logic.

Your Datas will get you through those agonising process puzzles with ease.

The motivator aka Mikey

Mikey is an idealist and a bit of a dreamer, but he brings his fellow Goonies together for a common goal. When things start to go down, Mikey’s the one who rouses them back to action.

Having someone with this high energy and enthusiasm will help you during those lulls in the game flow, or during those difficult puzzles where the task ahead of you seems impossible. They’ll help keep the fun and energy going throughout.

They’re also likely to be the ones who make a beeline for the costumes, make silly poses during the team photo and cheer whenever you pop a lock (note: this person is me).

The wildcard aka Chunk

Who doesn’t love Chunk? The Goonie who just lucks into solving so many puzzles.

Who discovered that the restaurant was run by a gang of criminals? Chunk, by accident.

Who discovered the secret tunnel under the water cooler? Chunk, by accident.

Who discovered the body in the freezer? Chunk, by accident.

Your wildcard is the person who’s best at lateral thinking and creative solutions. They’re just as likely to brush up against a secret door as they are to trip over a discarded padlock. And they’ll be your greatest asset when the puzzle requires an out of the box approach.

The wrangler aka Brandon

Poor Brandon. He had one job – look after Mikey. And he got roped into a pirate adventure.

Brandon’s role as big brother is to keep the other kids in check. So too your wrangler is best able to co-ordinate the team, maintain a discard pile, and delegate tasks to other players.

The ringer aka Andy

You’d be forgiven for thinking that Andy is just along for the ride. But she comes into her own at the last minute, using her musical skills to solve the final puzzle. Without her, the Goonies would be stuck.

In your escape team, having an Andy is difficult to plan for. You don’t know when you’ll suddenly need a musical whizz, or someone who’s learned Morse Code by heart.

Just make sure you hang out with a huge, diverse group of people with unique and seemingly unrelated talents. How hard can that be?

The bystander aka Stef

I’ve been racking my brains trying to work out what Stef brought to the table in The Goonies, and I can’t think of a damn thing. She’s just kind of … there? I figure it’s par for the course in terms of female agency in 80s films, which is a shame. Someone please correct me if I’m wrong.

If your escape team is large enough, chances are you’ll attract a bystander. Someone who’s not entirely as enthusiastic as the rest of the group but is there because they like to hang out with you all. So long as they have a good time and don’t jeopardise your escape, then that’s fine and dandy.

Which one are you?

Do you match any of the archetypes on this list? Is there anything I’ve not covered? Get in touch and let me know!