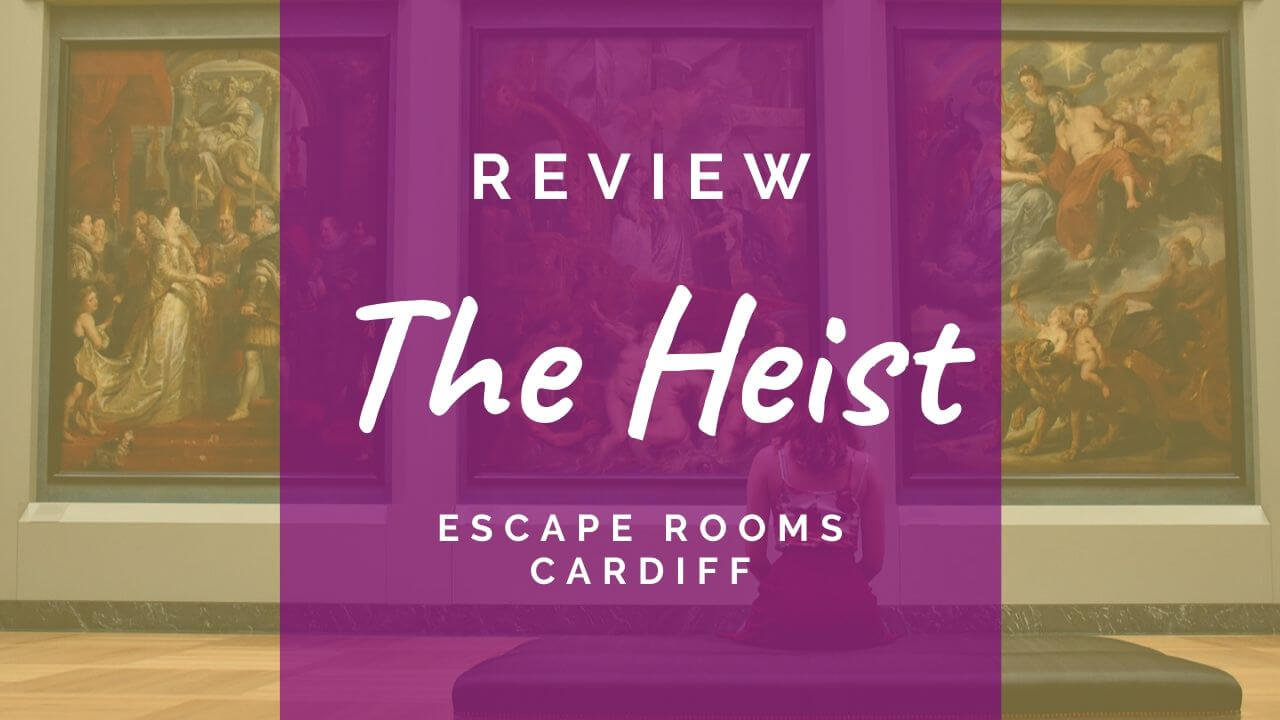 60 minutes to grab the jewel, disable the alarm and get the hell out of dodge. Are you up to it?

The Heist has been replaced with The Cardiff Castle. Check out the review!

There’s little that gets the blood pumping like a good old-fashioned heist. A crack team of the best robbers, working together to steal a diamond. A well-oiled machine.

Replace that “crack team” with a group of friends and lock them in together, that machine starts to struggle pretty damn quick.

Having visited Escape Rooms Cardiff during their launch last year, I knew a little of the room before attempting it. This led to my asking of my team “which one of you is the most flexible?”. They didn’t look too enthusiastic at that.

The Heist is arguably the most sparsely-decorated room in Escape Rooms Cardiff. Far from detracting from the room, this serves to add to the challenge. It’s also very much in keeping with the theme of the room – an art gallery.

As the largest room at Escape Rooms Cardiff, The Heist has the luxury of splitting into three sections. The payoff in the final section gave us that cinematic moment that we all had in mind going in.

From a personal point of view, The Heist is the least aesthetically-pleasing of the three rooms. It serves its theme well, but both The Tomb and Finding Sherlock have that extra level of pizzazz.

The Heist is the most difficult of the three rooms at Escape Rooms Cardiff. With fewer decorations comes fewer distractions, meaning we had to really nail every puzzle we were presented with.

Having us split into groups for the lion’s share of the room was challenging and fun. There room had a solid mix of skill, logic and mental puzzles that gave everyone in our six-strong group something to do.

Communication is key in this room. We were stuck on one puzzle because someone on one side left out a vital piece of information that they thought inconsequential. As a result, some members of the team weren’t able to do anything for a few minutes – there’s only so many times you can check that table.

There was a section where we kept getting the answer wrong because I came suddenly came down with a case of “can’t remember what shapes look like” but we won’t speak of that.

I also discovered one of my biggest weaknesses in escape rooms reared its ugly head again (it also happened to me in the Fibonacci room at Escape Reality). I won’t say what it is for fear of spoilers, but it was the kind of simple solution that had me kicking myself afterwards.

Hints come to you via the screen in the centre of the room that also acts as your timer. Whereas this was ill-fitting with the theme of the other rooms, in The Heist it was much more fitting.

The games master gives hints as and when they think you might be taking a bit to long on a particular task. They weren’t intrusive but I feel that it would be better to have the ability to ask for hints rather than be given them.

That’s not to say that they weren’t welcome. We definitely needed them!

We managed to escape with 9 minutes and 23 seconds on the clock. According to Escape Rooms Cardiff, the room has an escape rate of 30%, so we were feeling extra smug.

The Heist was great fun. It was definitely the most challenging of the three rooms at Escape Rooms Cardiff, and the best one for challenging team-building and communication.

I’d definitely recommend this room if you’re planning an escape room experience with work. Personally, I preferred the immersive aesthetics of the other rooms, but I still had a lot of fun.