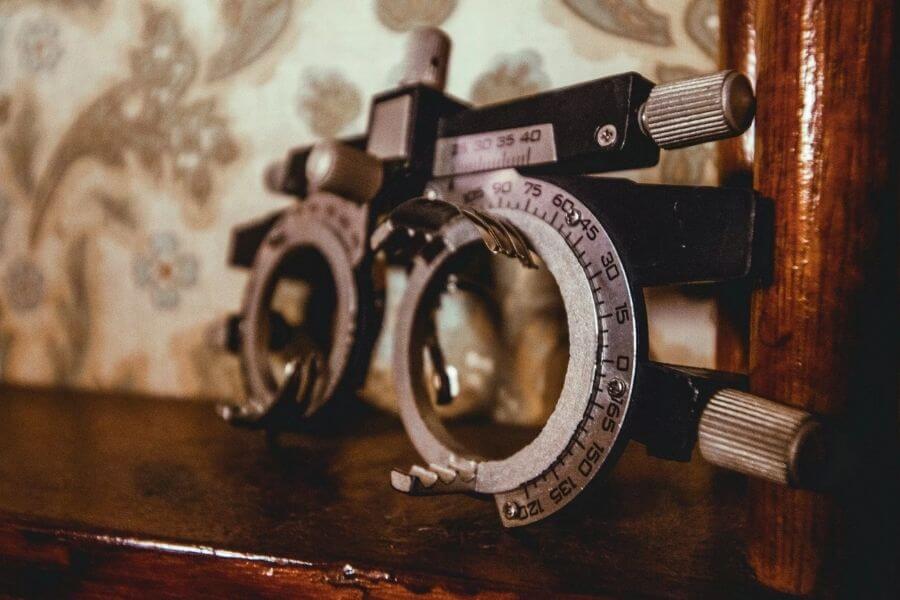 With the serial killer genre in full swing, this escape room delivers an eye-opening experience that’s frightfully fun for, well, perhaps not all the family.

When you’ve successfully escaped 10 rooms in a row, you might find that your ego has been well and truly stroked and a certain benchmark of expectations has been set that roughly translates to: Fighting talk during pre-game drinks and motivational speeches to the rest of the team.

Get into the psyche of the notorious serial killer, Oculus. Known for his obsession with eyes and scooping out his subjects’ blinkers, you must search and locate his final victim Becky Morris before her time runs out!

The room looks like someone’s dingy, old-fashioned flat and you find yourself in what looks like the living room. There’s a locked door to the left and the space is a little tight if you’re a team of six. I kept thinking, “there has to be more to this room than it seems”.

The décor was accurate if you imagine a creepy, gross place – a perfect fit for a serial killer. You get the sense that Oculus should probably focus less on the eyes and more on the state of his place. It does add a certain tension to the proceedings as you’re clearly not meant to be here and have seemingly disturbed him on his day-to-day killing spree.

I liked how almost all elements complemented the theme nicely, however I do think some decorations were purely there because they have something to do with eyes but not necessarily with a serial killer.

At some points during the game, the clock wasn’t visible, so time could have easily run out without the team realising this. You could say, we didn’t entirely have our eyes on the prize.

There were some familiar elements of a typical escape room mixed with some more unusual puzzles. As a whole, there were more puzzles in this room that were uniquely-outstanding than I’ve seen in other rooms.

One thing to point out though is that, while those puzzles were unique, they didn’t necessarily have anything to do with the theme of the room itself (not a bad thing).

There was a good variety of lock types, including some I’ve never come across – a fat bonus as I love a good lock.

There were definitely several moments that had me momentarily gawping like a fish in surprise, and many a gasp could be heard during our run. The mix of physical puzzles and innovative, technical ones were really good and balanced, meaning that people with different skill sets would probably make a good team for this rather tough room.

The tougher elements were mostly down to our overthinking, which I know is a big mistake when playing any type of escape room. The mantra is: keep it simple.

Hints came whenever the game master felt like we really were stuck and wasting precious time. You hear a ringing phone noise which alerts you to check the screen for the clue.

The clues themselves don’t give away the game, just nudge you in the right direction. And oh boy, did we need some prodding towards the end of the game.

Jamie’s note: This was my doing – I’d insisted that we’d already used a puzzle element when in fact we hadn’t. This turned out the be the final puzzle that allowed our escape!

The game master didn’t give too much away before letting us enter the room. This was good as I’ve swallowed some red herrings from instructors before that has wasted valuable minutes.

On arrival we were given safety tips and had to log our details on a tablet, which meant we were instantly get sent the group picture via text post game. It’s clever of Escape Rooms Cardiff to do this as the likelihood of people sharing their experience is probably highest right after they played.

An additional, and much appreciated extra is that the logo of the room is visible on the group photo alongside any remaining minutes or seconds, giving you a fact-based memento that also makes it difficult to fib about your success. (Trapped teams don’t see any time below the room’s logo).

I also appreciated the badge we received at the end, making it a good collector’s item for any big escape room fans.

Hell yeah! But with so little time left on the clock (33 seconds to be exact), it made for an uneasy win. I must also shamefully admit that there were brief moments towards the end where I had to mentally prepare myself of the prospect of finally being trapped.

I felt hopeless and lost until the incessant shouting of my team mates brought me back to the situation.

I’d highly recommend at least four people for this room. Having a few fresh pairs of eyes will definitely help with the variety of puzzles and it’s not exactly a beginner’s room either. Be warned, newbies!

The creepiness and tough, unique puzzles make for an incredibly delightful game with good “Oh My God!” moments.

Escape Rooms Cardiff are renowned for their imaginative, well-thought-out rooms and Oculus is no exception. For the true crime fanatics, it’ll give you a glimpse into the underbelly of a serial killer’s mind with the safety of knowing that no one’s scooping out your googlies any time soon!

Images belong to Escape Rooms Cardiff and are used with permission.