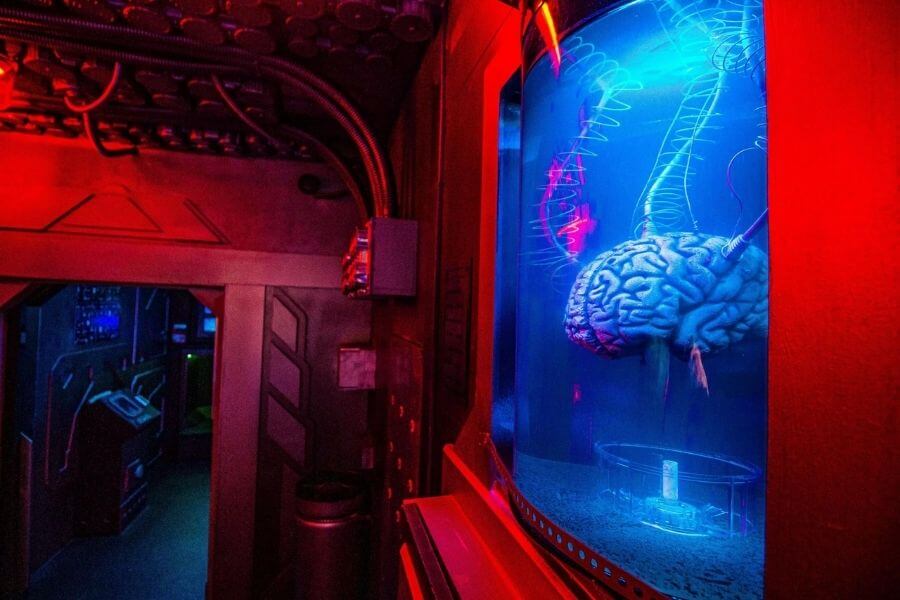 I’d been on pins for months waiting for Escape Rooms Cardiff to open their latest room. Since they teased the new rooms at the end of last year, I was eager to give Press Start a go. All of their other rooms had knocked it out of the park.

You’re at home playing a newly released sci-fi video game. As you approach the final level the screen gets brighter and your arms and legs begin to pixelate!

Before you know it you’re sucked in and transported into the game itself! You have 60 minutes to the beat the brain!

Press Start is arguably the best-looking room in Cardiff. From the very beginning you’re sucked into the world with an excellent entrance to get you into the mood.

The tech worked without a hitch and the sound effects kept us the theme. The set design was top notch and solidly built.

It’s a small room, so larger teams might feel a little cramped. That being said, they cram a lot of decoration into the space!

One thing that was lacking in this room that Escape Rooms Cardiff usually do quite well is the ‘a-ha!’ moments where you uncover a secret door or similar. The room’s flow was fairly straight forward and events unfolded pretty much how you’d expect them to.

With its neon flashes and abandoned space ship design, the room felt very much more cyberpunk than retro video game.

Sadly, Press Start was lacking for me in terms of puzzles.

There was an over reliance on traditional logic and trivia, which I think was a means of playing to the high-tech theme (so no analogue locks). However, there wasn’t a great deal of diversity or complexity to many puzzles – some were merely trial and error.

One of the puzzles was quite unique – I’d never seen it before in a room and so we’d discounted it at first. It was clever but ate up a good chunk of our time (we had to get a hint to realise what we needed to do).

We only had a team of two and there were times when one of us was lurking in the room and looking over the other’s shoulder. There didn’t seem to be a great deal for both of us to work on at the same time.

There was a multi-step puzzle at the midpoint of the game that I really did enjoy. Part of the puzzle was visible from the very beginning, but you were only able to properly ‘get it’ later on.

The game ended with a lacklustre finish and we felt somewhat unfulfilled when we escaped.

Hints were delivered via a screen and we were asked if we wanted a clue before we were given it.

The hints that we got weren’t text either – they were pictorial, which I greatly appreciated and the first time I’d seen this in an Escape Rooms Cardiff room.

The pre-game briefing was delivered via video and our post-game photo was sent to us within a few minutes of us completing the room. We also got a badge for beating the room.

You bet your sweet patootie we escaped, and with nearly 23 minutes left on the clock. I’ve heard of teams of five only barely managing to escape, so maybe this one just worked with our brains better.

Press Start is, I’m sad to say, all fur coat and no trousers. It looks incredible, and as a set piece it’s one of Cardiff’s finest. However, it’s brought down by a lack of diverse, quality puzzles and an lacklustre conclusion.

Our team of two breezed through it, but I’d say no more than three people in the room due to its size. You’ll also likely be not doing anything for portions of the game while the rest of the team crack on.