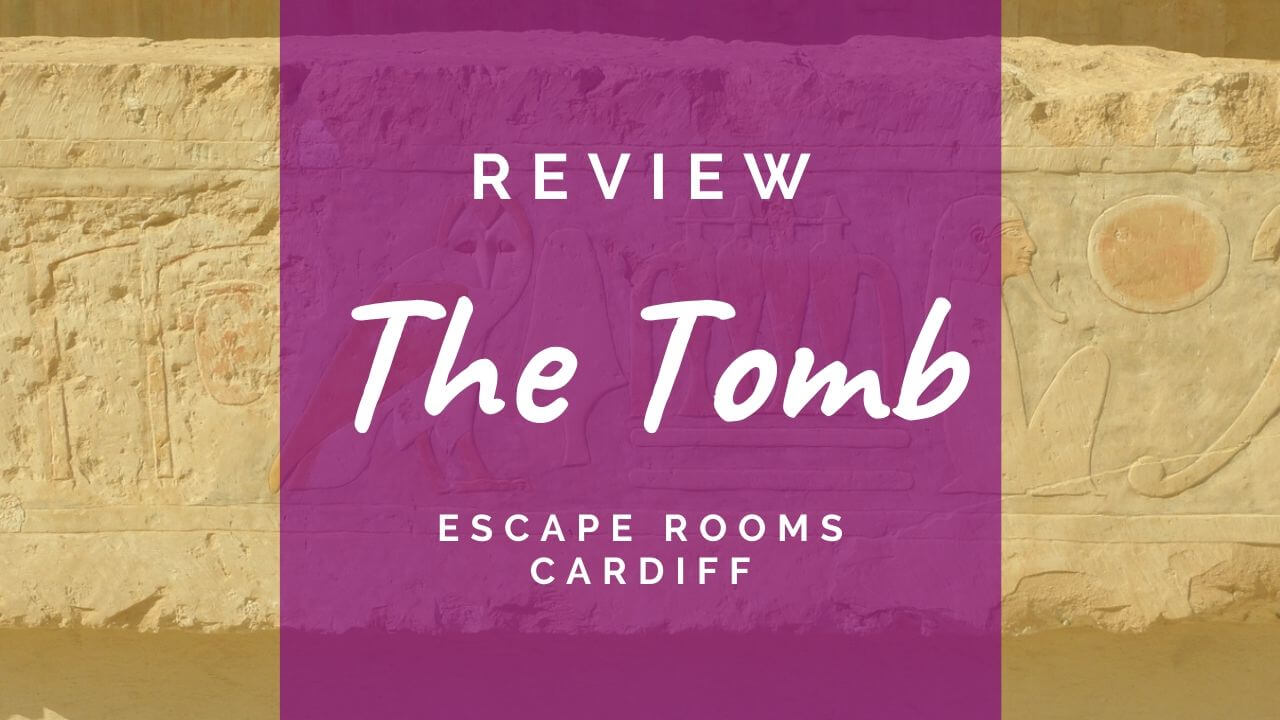 An archaeological excavation gone wrong sees you trapped in the bowels of a pyramid. Best get out before the curse leaves you crying for your mummy.

The Tomb at Escape Rooms Cardiff is quite special to me – it was the first escape room I ever did, back when the hobby first broke out (heh) onto the Welsh scene a few years ago.

And so when it came to pass that I was nearing my 25th escape room, I was excited to have the chance to give it a go again. Could I beat my previous time (23 minutes to spare) after a three-year break?

Stumbling inside the lost tomb of Tutankhamun in search for the missing Howard Carter. Setting off the booby trap, you have 60 minutes before the walls come down around you! All the physical puzzles are from ancient times, so you have to think like an Egyptian if you want to get out of this one in time.

The first thing you’ll notice about The Tomb is that it’s dark. But rather than give you bright flashlights, the room is lined with flickering torches, adding a layer of gloom. This can make some of the puzzle elements difficult to see, but the dingy atmosphere enhances the immersion.

And immersion is something that The Tomb has in spades (heh, digging pun). Your first step into the room is met with the crunch of sand underfoot, and heiroglyphs and Egyptian motifs are painted on the walls. It’s quite easy to suspend your disbelief and let yourself believe that you’re in the real deal.

Unfortunately, this immersion was temporarily broken for us when one of the big ‘a-ha’ moments didn’t happen due to an incorrect room reset. We’d done the right trigger, but nothing happened. Our GM had to come into the room and manually fix the issue.

This was a shame, as our group had a first-timer to escape rooms and that would have really shown off what’s special about the hobby.

The Tomb has a few large puzzle centrepieces in its initial room, and one or two smaller ones later on.

The puzzles of The Tomb are more physical than in your traditional escape room – think Crystal Maze-esque puzzles and challenges. This worked well with the theme – having to push, pull, twist and manipulate heavy set pieces maintained the illusion that everything in the room was of ancient construction.

There’s some good, subtle use of tech in this room that plays with the smaller space. At first the apparent lack of combination locks was a little disconcerting, but these have been largely ditched in favour of something more immersive.

One of the puzzles required one of us running back and forth between rooms while the other two just stood there, which seems like a bit of a waste. The team as a whole could have cooperated and communicated the solution with the simple addition of a second tool.

The final puzzle took way longer than it should, but that’s completely down to me. There’s a certain kind of puzzle I’ve come to realise I cannot do when under time pressure. My flapping about likely cost us precious minutes.

The hint system at Escape Rooms Cardiff is your standard fare – screen above the door that also acts as your timer. Our GM was good at giving hints that allowed us to gradually come to our own conclusions (though I was so bad at one puzzle that they had to literally spell it out!)

The briefing and team photo process at Escape Rooms Cardiff is slick and efficient – briefings are given via an introductory video, and our team photo was sent to us via text and email within minutes of leaving the building.

Yes we did, thank you very much for asking. We got out with 19:05 to spare – a full four minutes less than when we first attempted the room.

We used two clues for The Tomb, which were delivered via a screen above the exit door.

The main thing that’s changed is the lighting. When I first played The Tomb we were given wind-up torches to use in an otherwise pitch-black room. This was fine, but the addition of the wall sconces were much more atmospheric, and actually made some puzzles more challenging.

The larger, more physical puzzle elements were exactly the same as before – even with prior knowledge of how they operated, they still took a bit of time to do as they were more skill-based.

I believe the final puzzle was more difficult the second-time round, which led to a few wrong initial guesses. My own ineptitude at this kind of puzzle did the rest.

The Tomb is a great example of the kind of cinematic, immersive escape experience that Escape Rooms Cardiff has to offer. Its puzzles are less in the traditional vein, and so tend to be a little easier than most rooms.

I’d recommend a smaller team (two people or even solo), or a team of three first-time players.

It’s just a shame that the technical glitch and intervention by the GM hampered an otherwise enjoyable escape experience.

Have you played The Tomb? Let me know what you thought of it in the comments!