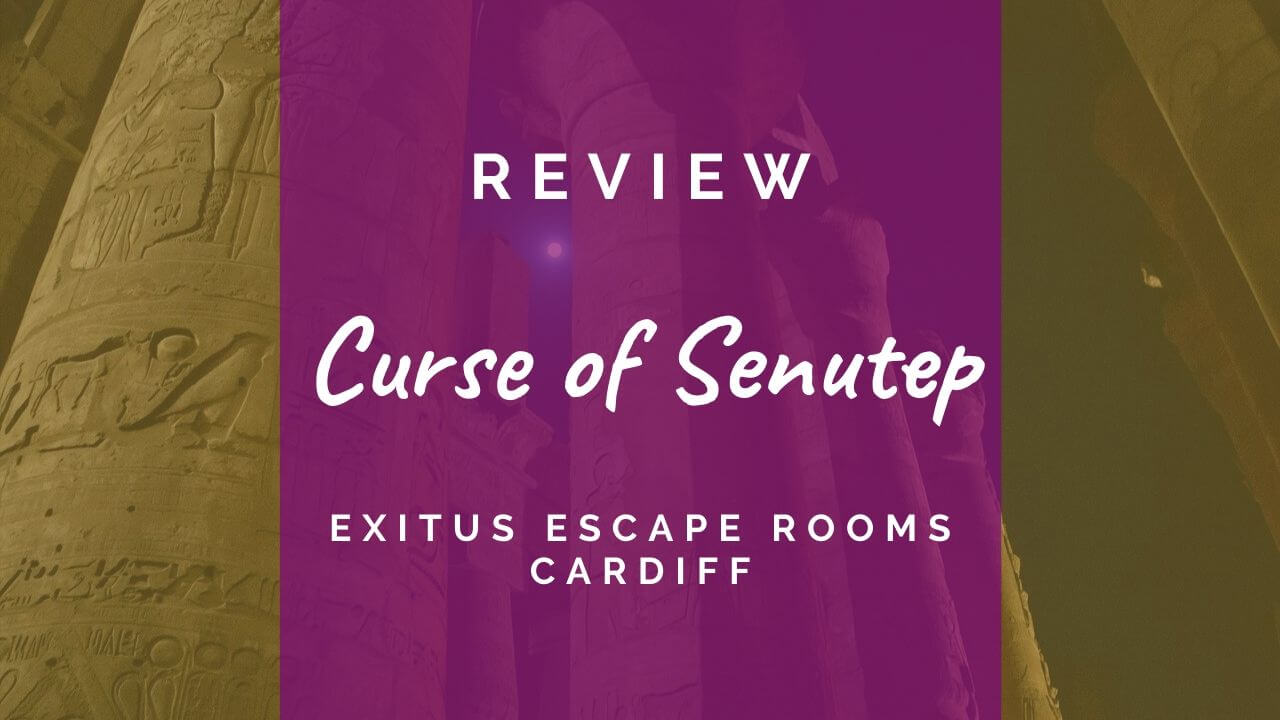 It’s no secret that I really enjoy ancient Egyptian escape rooms. To give it that ancient feel, puzzle designers have to work harder to ensure their rooms are more in keeping with the ancient aesthetic. Who’d want a high-tech lock system in a supposedly Egyptian temple?

So it was with great excitement that we paid a visit to Exitus Escape Rooms in Cardiff to tackle The Curse of Senutep. I had two things on my wish list: Could I translate some heiroglyphs, and could I wear an Indiana Jones fedora?

Your great grandfather, Thor Heyerdahl, disappeared decades ago while researching the lost pharaoh Senutep. After years of carefully studying his notes, you have determined the location of the ruined House of Senutep, and you believe that is where you will find out what happened to Thor.

The mystery is not the only thing that drives you. Thor entering the tomb released a curse. This curse has been following your family through the years. You must solve the mystery of the Pharaoh Senutep, the leader erased from time, in order to survive.

As you’d hope with an Egyptian game, there was a predominantly analogue vibe to the room. Decorated stone slabs, parchment, wood slats, the works. What did impress me was that a number of the elements within the room did have some clever use of tech but were well hidden within the decor.

Senutep is a smaller room complex than their first room, Plague, with the lion’s share of the puzzling done in the first, larger room. The main puzzle elements hug the walls of the room and I felt the central space could be utilised more, either with a puzzle element or a decorative centrepiece to give the room a slightly more claustrophobic feel.

There are several satisfying moments in the room where a secret compartment pops open as a reward for solving a puzzle, which was extremely gratifying and helped to amp up the Indiana Jones feel.

We only had one snafu where the door to the second part of the game didn’t open for us, but that was entirely my fault in leaping ahead in the puzzle due to being ever so slightly cocky in solving it.

Senutep’s main drawing point for me was that it’s a non-linear room – you can do almost all the puzzles in any order you wish.

This meant we were able to play to our strengths – I mostly focused on translating hieroglyphs on the fly (thank you Egyptology degree!) that meant I could speed through some puzzle elements.

There were only two traditional locks in the entire room – all the other puzzles used clever mechanics that helped maintain the ancient vibe of the room. The puzzles were varied too – a combination of searching, lateral thinking and pattern recognition combined with a spot of translation and dexterity thrown in for good measure.

One of the puzzles in the game reminded me of something I’d played in a Tomb Raider game, or something from The Room mobile games (both of which I love), which was a bonus.

There’s also a clever use of the sand that coats the floor of the room that I’ve only seen once before and enjoyed the hell out of solving it. At first you might think you’re playing it wrong and that you’ll break something, but fight those instincts!

On reflection, I felt that the final puzzle and exit was ever so slightly anti-climactic, and I think this is a challenge for any room that doesn’t have a definitive ‘you need to input this code to get out’ or ‘your ultimate goal is to say a certain password to secure your escape’.

Having that endgame in mind helps to set your expectations so you know when you’re hitting the final puzzle / lock. I think one more puzzle in the final room could help with that.

We breezed through the game, and needed one hint. Our GM would also occasionally chime in over a loudspeaker in the room to encourage us. Our timer was a traditional hourglass, and hints were delivered over the speaker as if our contact was communicating over walkie-talkie, which kept in with the theme.

The pre and post game customer care in Exitus is what sets it apart from other places I’ve visited. As I mentioned in my interview with Exitus, their rooms are made by passionate enthusiasts and it really shows.

We had a good chat with our GM before the game about games they like, their plans for new rooms and what they enjoy about escape games. The atmosphere was relaxed we didn’t feel like we were being herded out to make way for the next group.

Not only did we escape, but we smashed it. Armchair Escapist currently holds the 2-player record for the room, with an escape time of 35:41. Not too shabby.

The Curse of Senutep is a fun, unique twist on the traditional escape puzzle experience. With its non-linear setup, there’s something for a team of any size to do here. It’s a well-built analogue room with cleverly-hidden tech and a range of puzzles to suit all skill types. Definitely worth a go,