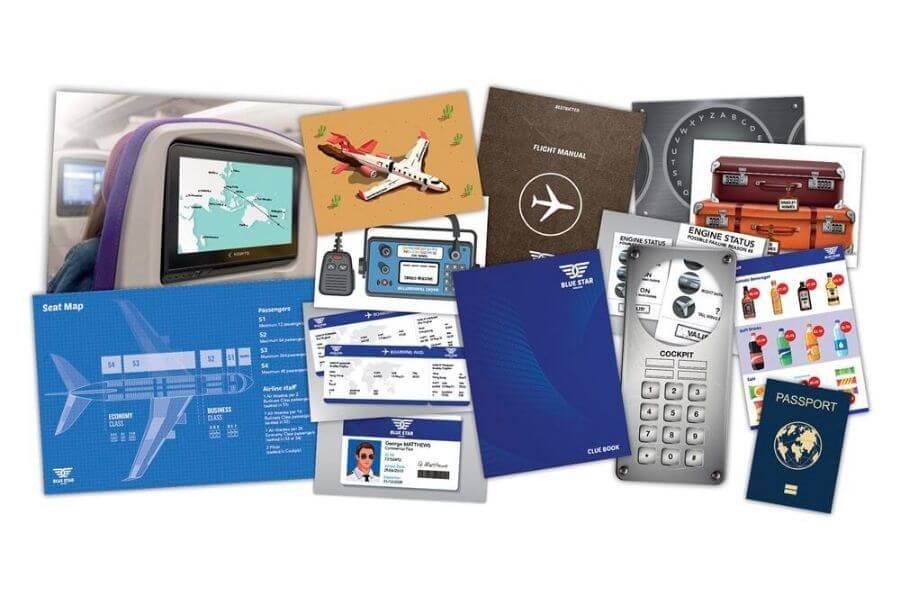 A great party game for escape fans and newbies alike.

This article contains affiliate links. If you buy any products via these links, I may earn a small commission. It doesn’t cost you anything, but it helps support a little puzzler like me.

If there’s one thing I enjoy about the escape experience that many play-at-home games can’t scratch, it’s the flitting between different parts of the room, busting into new areas, and just being in the gamespace.

I enjoyed the previous games in the Trapped series – The Art Heist and The Carnival, because they scratched this itch even while playing at home.

And now, Trapped has a second season of games – The Zoo, Mission to Mars, and Flight 927.

I missed out on playing the hardest difficulty game in the first season of games, so we made a beeline for Flight 927 this time round.

Finally! The holiday you’ve been waiting for has arrived. Excited, you board the plane, looking forward to a week of relaxation. Not long into the flight, though, the plane starts to shudder. Suddenly, you’re losing altitude! Your stomach lunges as the plane plunges. Over the tannoy the pilot shouts, “Brace for impact!”

Panicked, you adopt the brace position – and then … Darkness! As you regain consciousness, you open your eyes and realise the plane is down! Now it’s up to you to call for rescue. Can you get into the cockpit, send out a distress signal – and save the day?

Unlike previous Trapped games we’ve played, this one is designed to be split into two sections – the passenger seating area and the cockpit. This was really fun to set up, essentially ‘locking’ part of the gamespace away until we worked out the right codes.

I enjoyed using the space this way – it gave me a smaller version of that thrill you get when you bust into a new room in a physical escape room.

The setup was really straightforward – every component tells you to put something on a table or stick it to the wall. The game packs come with low-tack tape so you don’t have to worry about providing your own tape.

The artwork was decent, if a bit disjointed and inconsistent throughout. There wasn’t much artistic cohesion in the game materials – most of it felt like a collection of ‘stuff’ rather than all belonging to the same experience.

There’s a good amount of material in this game – more than I’ve seen in previous Trapped games. The walls of our living room were dotted with various elements from the plane’s interior.

There wasn’t much searching needed for this game, so me having setup beforehand didn’t impact on how we tackled the puzzles. It’s a nice touch that the person who sets up can also be a player.

The core puzzle mechanic and answer confirmation system in this was pretty solid, and allowed itself to be played without any extra online interface.

We appreciated this – most at-home puzzle experiences now have a digital answer checking system, whereas Flight 927 could be played completely offline.

There were some solid puzzles in this including deduction, lateral thinking, observation and decryption. There’s a fair bit of maths involved here too, so make sure you’ve got a calculator handy.

I’d argue that one puzzle mechanic is instantly recognisable to people over 30, so we had great fun (after a few false starts) solving it. I was pleased, as I’ve always been terrible at this kind of puzzle in the past.

The opening half of the game didn’t really connect the puzzles to the overall story of the game. How would a set of passenger luggage tags give us a code to enter the cockpit? The second half of the game was more in keeping with our overall goal.

The way the game has you set up the room means that every puzzle is a true exercise in teamwork.

We promised ourselves we wouldn’t remove any game component from its original spot, meaning we had to communicate our disparate pieces of information from across the room.

This aspect of teamwork can sometimes be lacking in the at-home experiences, so it was nice to regain that feeling.

The puzzles themselves weren’t that challenging, though it took us a little while to get into the groove of what the puzzles were asking us to do. Once we got over that hurdle it was smooth sailing (or flying) for the rest of the game.

One of my favourite things about this series is that everything you need is in the box. Low-tack strips are provided to help you stick things to walls without it taking down your wallpaper afterwards. It also comes with a clip that lets you turn your game box into a clipboard for taking notes. It’s a well-thought-out game pack to make the whole experience as seamless as possible.

Though we didn’t use any hints, we used Flight 927’s hint system to confirm our answers. The game uses a pretty cool hint system using a book of text and a Grille decoder card, which highlights certain words on the book.

Each hint doesn’t give you the full story, though. It’ll say something like:

You then find hint #32 to get the rest of the hint.

Though it can be a bit time consuming to slide back and forth for a single hint, it reduced the risk of spoilers (either accidental or deliberate). Given the younger target age, I see this as a plus point.

The Trapped Escape Game series would make for a perfect game to take on holiday or if you’re throwing a party. It’s highly portable and has a great party game vibe. Flight 927 is on the more challenging end of the scale, but still family friendly and accessible to most players.