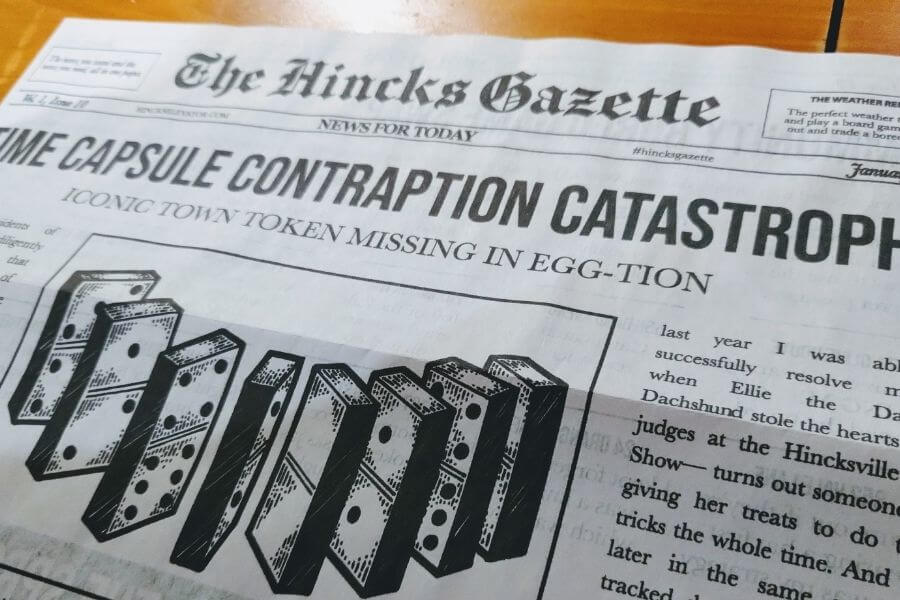 An incredibly fun and satisfying game to play.

I’ve been a regular playtester for the Hincks Gazette since last June. As such, I never thought it fair to review them here seeing as my role is to find as many broken bits as possible (and the final game is usually different to what I play).

It was fortuitous, then, that January’s edition passed me by, meaning I got to play the final version of the issue. And I’m really glad it turned out that way.

Hello, Puzzler. I’m Mr. Hincks.
​
Are you up for a challenge? Excellent.
​
Subscribe to my Mysterious Puzzle Newspaper and I’ll mail it right to your door.
​
Grab a pen and maybe a friend, and spend an hour or two puzzling out its secrets.
​
You may just add your name to the Hincks Hall of Fame!

Until then!
Stephen P. Hincks

The Gazette is a double-sided sheet of newspaper, printed onto newsprint, so it feels like the real deal.

Just like the other games set in the Hincks-verse like The Curious Stairs of Mr. Hincks, the Gazette is very light on story. You’ve got a collection of articles, some advertisements and usually some local news thrown in for good measure.

The main article usually outlines some calamity that Mr. Hincks is trying to fix, and your puzzling efforts aid in that. The tone is just as fun as the full games in the Hincks-verse, with several chuckle-worthy moments as you read the articles (and believe me, you will read every article).

The art is as eccentric and off-the-wall as the content of the newspaper. Everything very much makes sense in the Hincks-verse, but it’s quite silly and I love it. If Monty Python ever made puzzle games, I think Hincks would have been the result.

Games within games and a most-satisfying puzzle flow

I’m amazed at how many puzzles they can hide in the Hincks Gazette. Every single article in the paper has a puzzle, well-hidden enough that it’s completely invisible if you haven’t ‘unlocked’ it.

The game is strictly linear, and has a really cool puzzle mechanism – each puzzle’s solution gives you instructions on how to solve the next puzzle.

The puzzle flow is really good – more often than not there’s one part of the Gazette that screams “I’m a puzzle, solve me first!” If you’re a completete newbie to the series, this might be tricky at first, but you soon get the eye for it.

All of the puzzles revolve around wordplay, so you’ll see a mix of shift ciphers or combining certain words based on specific criteria. Some issues have you manipulate the newspaper itself, which is cool.

The January issue was particularly fun as it had a game within a game, which was both hilarious and insanely clever. My hat goes off to Bluefish for consistently coming up with inventive and fun puzzles packed into these small games.

Added competition for the leaderboard

The Gazette has a very neat step-by-step hint system that acts as a pseudo-walkthough (though all hidden unless you activate them). We didn’t need hints for this issue, but they’ve definitely come handy in the past.

Bluefish’s games also have a leaderboard – the first ones to solve get first place, and everyone follows.

This is my one and only gripe with the game – tea-swigging Brit puzzlers such as we have to wait a good while for the Gazette to arrive from over The Pond, meaning any chance at hitting the top spot was shattered long before the issue arrived on our doorstep.

Not that’ I’m competitive, you understand.

The best Gazette by far

I’m a fan of the Hincks Gazettes, but this most recent one has been their best yet. If you’re tempted to start, I’d recommend getting the January 2021 issue first.

The Gazette is for anyone who likes wordplay and enjoys their puzzles with a side of silliness. It’s an hour of pure fun and it’s sure to put a smile on your face.