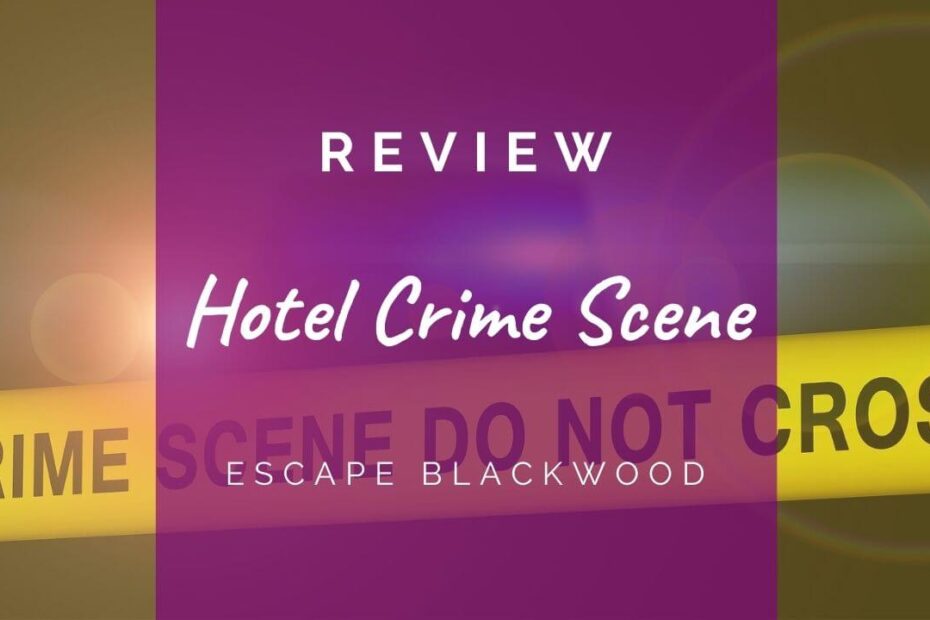 An escape room an murder mystery combined – a little rough around the edges but lots of fun.

As our first post-lockdown escape room in real life, I was a little nervous that I’d lost my edge. I was fully suspecting to wind up a crying mess on the floor as soon as the timer started. Hotel Crime Scene from Escape Blackwood intrigued me due to it’s ‘two-games-in-one’ feature. And it’s practically on my doorstep!

You and your fellow detectives have been invited to a conference to discuss a local breakout of murderers.

All is not as it seems as one of the murderers going by Nemesis has managed to lock you in the hotel whilst taking another victim in the process.

Can you escape the hotel and find your suspect at the same time?

The rooms were well built and decoreated to look like a hotel lobby and adjoining room.The rooms were fairly small but they made good use of the available space in some clever ways.

The game is a constructed set within a larger area. Some parts of the decor are a little rough around the edges and give this away, but it doesn’t detract from the experience while you’re playing.

There were some nice touches in the decoration to maintain the illusion – one that made us second guess retrieving one of the keys in a particular room.

One of the props broke the suspension of disbelief as it was a much smaller, toy version of the thing it was meant to represent.

I thoroughly enjoyed the game within a game side of things.

The various maerials we’d handled throughout the game helped us do this and were subtle enough that we needed to go back through some elements of evidence to make sure we got it right. More games should have this feature.

The puzzles were a mixture of lateral thinking, observation, pattern recognition and searching.

There was a good puzzle mix – it was quite lock heavy (which I like) but but enough variation in the locks themselves to have a diverse mix of puzzles.

Signposting improved as the game progressed. At the beginning one or two of the solutions seemed to require a logical leap to get. One in particular required us to wait a minute or so while some information looped back around, which ate into our time a little.

We used one hint, which was delivered on a screen in the room. This hint was early on in the game, and I blame 6 months of lockdown on making my puzzle solving skills a little rusty.

Our GM Adrian was great – he was passionate and enthusiastic and had made us feel at ease, especially with the various changes that had to be made around adapting to Covid-19.

I had a good time at Hotel Crime Scene – the two-games-in-one aspect was a solid success and I’d love to see other games replicate this format for that extra achievement.

The game was a little rough around the edges in one or two places but the puzzles were good and flowed well.

I’d recommend this room to those that want a more traditional escape room experience but with the added flavour of a murder mystery. Groups of 2-3 would work well – any more and you might step on each other’s toes.

Escape Blackwood
Unit 3A, Newbridge Industrial Estate, Pontllanfraith, Blackwood, NP12 2XF
Bookings are £15 per adult and £12.50 per child under 12