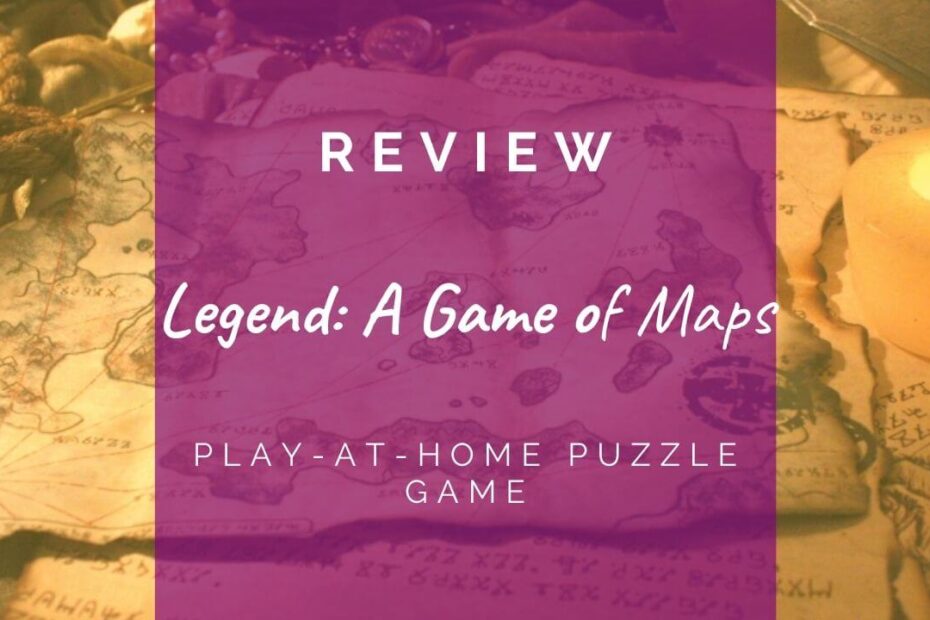 One of the best – and most common – themes of play-at-home escape games is the treasure hunt. The collection of ephemera that you get suit the theme down to a tee. It’s as close to being in The Goonies or National Treasure as you’re likely to get.

So I was excited to get two personalised envelopes on my birthday last year – the first two parts of Legend: A Game of Maps. It promised adventure and treasure to boot – but did it live up to expectations?

In Legend: A Game of Maps, you get to take the captain’s wheel in your own personalized adventure. By completing increasingly clever puzzles you learn the secrets of a vast story that spans centuries and continents.

What awaits you on your way to forgotten wealth, you ask? Conspiracy… murder… and the greatest treasure of all time!

As soon as I opened up the first envelope, I knew I was in for something special.

This is the most beautiful at-home puzzle game I’ve ever played. It feels incredibly real. All of the materials are on distressed parchment or cotton paper, beautifully illustrated and aged to look authentic. The feel – even the smell – of the components makes you think you’re handling real historical artifacts.

The scene is set with a series of type-written letters from the Kattering Institute, who’ve enlisted your help in deciphering historical documents that potentially lead to a hidden treasure. These are set at the turn of the 20th century, and again they feel like legit documents.

Even if you’re not a fan of puzzles, these materials would make for a wonderful display piece.

Part 1 is a light puzzle experience to whet your appetite. It largely revolves around a single, deciphering puzzle, followed by some map work. There’s not a great deal of depth to the puzzle side of things, but you’re given a wealth of story as you decipher the materials, and it’s satisfying to see the story unravel. We completed part 1 in an evening without any issues.

There are two separate puzzle experiences in part 2 – a coded letter and a map/codex combo.

The coded letter stumped me so much I put the game down for a few months before having a sudden eureka moment. I was pleasantly shocked at the level of depth of codes that you could hide in a single letter. I’m quite in awe of the work that would have gone into seamlessly hiding so many codes using the same materials.

The map/codex combo had a range of puzzle types including physical manipulation, pattern recognition, maths and mapwork.

Due to the nature of aging materials etc, some of the finer details can get lost or obscured. This occasionally gave us some hiccups when they were important for solving the puzzles and delayed our progress.

What sets Legend: A Game of Maps apart is its emphasis on discovery. The signposting is there for sure, but it’s so subtle and blended into the materials that you don’t notice it at first glance. It can be frustrating if you’re looking for a quick fix puzzle game. But good things come to those who wait.

Even after I’d finished both parts, there was still a wealth of codes and puzzles mingled into the materials that will connect to future adventures (there are seven parts planned in total). These tantilsing glimpses into what’s coming up just added to the excitement.

The hint and solution checking system is simple – email the creator. Ron was great at giving subtle hints that didn’t give too much away, and kept us motivated when we were on the right track.

The drawback of this method was that – largely due to timezones – there was a delay between asking and getting hints. This meant that sometimes our drive to continue had waned as other things came in and life got in the way. This is why it took us an evening to finish part 1 and nine months to finish part 2!

I think some kind of online hint system would be useful. I’d keep the email for checking the solution, as players are rewarded with additional content when they get it right.

Another thing that would be useful is something like a Facebook group where players can help one another and discuss theories. It was thanks to Jilian and Rita on the Puzzle People Facebook group that I got back into completing the last stage of part 2, and that community aspect was really satisfying.

One thing to note for fellow UK players – although this was a birthday gift I got stung with customs charges, so bear that in mind if you’re thinking of getting it.

Legend: A Game of Maps is a wonderfully-crafted and in-depth puzzle experience that is as close as you’re likely to get to feeling like a real treasure hunter.

This isn’t an ‘escape game’ like you might be used to – this is something to take your time over and enjoy the details.

I’d recommend this game to anyone who watched The Goonies and wanted to recreate that feeling of discovery. I can’t wait for part three!

Legend: A Game of Maps
Designed by Ron Francesangelo
Ages: 12+
Cost: £20.03 (part 1) – part 2 is sold out at the time of writing
Duration: As long as it takes – this is one to sip and savour
Requirements: Paper and pen for notes; access to email to submit answers / ask for hints

Play Legend: A Game of Maps