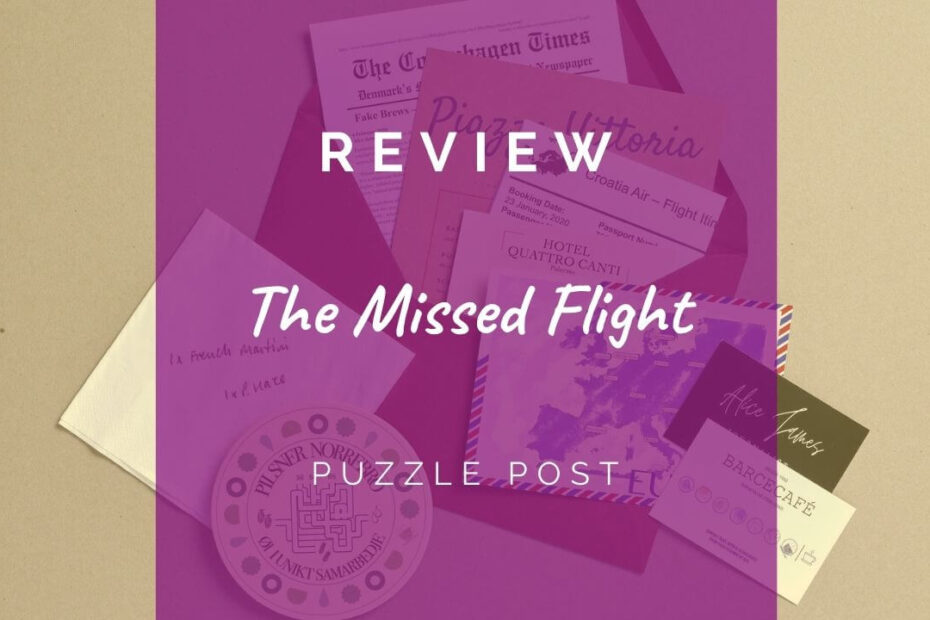 I’ve had a hankering for the puzzle-by-mail game since I send a copy of Enigagram to my brother for his birthday. But, as they say, always the bridesmaid, never the bride.

So when Puzzle Post UK had an offer to get a free game if you sent one to someone else, I knew I couldn’t say no.

You gave your message to Lucy Kingston to deliver. She’s been travelling around Europe but has been caught up in some unscrupulous business.

She’s hasn’t done anything wrong, but someone’s after her and she’s gone into hiding.

She’s stashed your message in our online vault, and created a series of clues from her trip.

In unlocking the message, the recipient may just find out what’s happened to Lucy as well.

The first thing I noticed when I opened the letter was that there was a surprising amount of content. And the materials were really well made. Each item had a different texture, giving the whole package that tactile feel that you sometimes lose when playing an at-home puzzle game.

Some items were hand-written/stamped, which enhanced the immersion and gave it that little personal flavour.

I liked the fact that the stakes weren’t that high in the story. Okay, someone’s gone missing, but it’s not a world-ending scenario like many puzzle experiences. It kept the story more believable, especially given the medium of the dead-drop letter.

There’s also a nice element of digital interaction in the game that gives you that little push into believing that this is a real mission. Everything in the package felt genuine, which made the puzzle solving all the more satisfying.

The puzzles in The Missed Flight were a mix of ciphers, hidden messages, maths, physical manipulation and pathfining.

The game is non-linear. There’s a suggested order to solve the puzzles (which is done in such a clever way that fits in wonderfully with the theme), but you can tackle them however you like.

The lion’s share of puzzles are pretty well concealed within the materials so at first glance you’d be forgiven for missing them (we did for one or two). The cipher puzzles were a bit more on the nose so we were able to sniff those out quicker.

The game is really well signposted. We got stuck with the particulars on one puzzle – once we figured it out we realised there were multiple nudges encoded within the design. The main sticking points came from us making things more complicated (or not heeding the signposting).

One or two puzzles required two items to be used in tandem, which I really liked. I wished there was more of that – most of the puzzles were self-contained in a single item.

Difficulty-wise, I’d say this was about right for us to complete in a comfortable time. A solo puzzler might have a slightly harder time of it, but I think the puzzles were well-balanced.

Each item in the package has a graded hint system, offering you three hints of increasing spoilerhood before allowing you to get the answer.

The hints were subtle enough (and sometimes coded) to either point us in the right direction or confirm we were on the right track.

Once we’d found our code, their online vault system gave us a unique ID to retrieve our message. You can add in whatever message / photo / video you like – I chose the classic Rickroll.

The Missed Flight makes for a perfect puzzle gift. The story has believable stakes, the puzzles are solid and the quality of the components is excellent. I’d recommend this for anyone wanting to send their favourite puzzler something a little different for that special occasion.