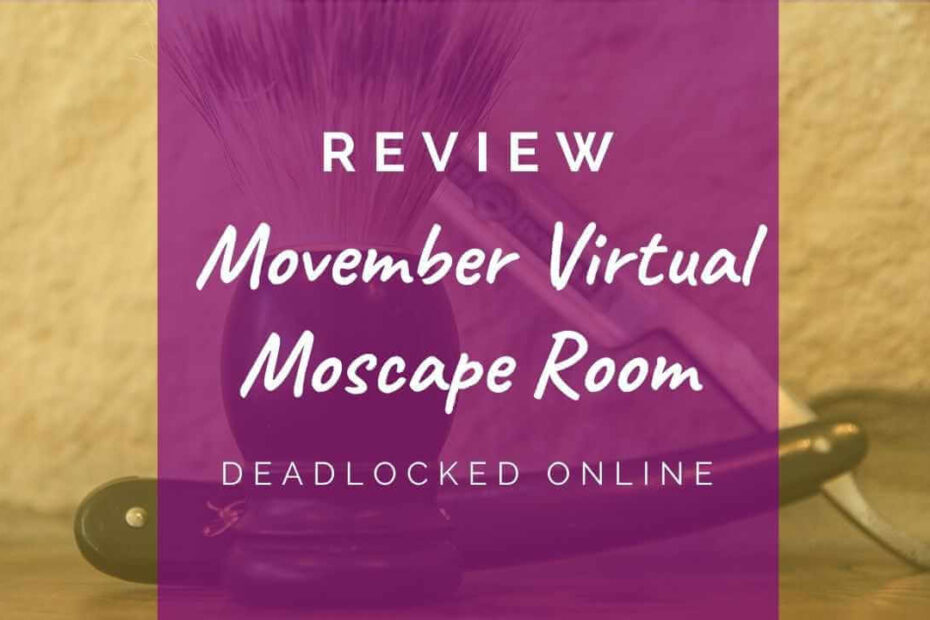 A superb entry point into the Wexell-verse that’s funny and full of heart.

It is October 31st, the eve of Movember, and ‘T’ is working late, instead of hosting his famous annual Halloween party, but this leaves him without his shaver when he needs it the most.

Movember starts tomorrow, and the Wexell Corporation take it very seriously. So seriously that if he hasn’t shaved by midnight, they will count it as him CHEATING AT MOVEMBER.

You’ll have to break into the security at the Wexell Corporation, but only if you can help his colleague, Joey, get into his house and locate his surprisingly well hidden ‘special razor’.

Why does he need this specific razor? Why is Joey going along with this mad-capped adventure, and can you help a rapper come up with an on-brand rap before it’s all over?

All these questions and more can only be discovered by playing ‘The Movember Virtual Moscape Room’. It’s about to get hairy.

Unlike Deadlocked’s previous two at-home games – The Insiders and The Cyphstress, the entirety of Moscape is online. The lion’s share of the game takes place in a custom desktop interface, though parts of the game see you hacking into security cameras and manipulating remote circuits.

Your point of contact and person on the ground is Joey, whose interactions with you are full of humour and no small amount of sass.

The chatbot element to this game is superb, and much like with The Cyphstress, I wasn’t fully sure whether I was actually speaking to one of the game’s creators in real-time. If not, they’ve crafted one hell of a chatbot!

Your interactions with Joey come with a mix of images, audio and videos to enhance the puzzle experience. There’s even some multiple choice elements, which I enjoyed.

One of Deadlocked’s strengths is that they mix humour and heart incredibly well, and Moscape is no exception. There are also some fun cheeky nods to the filmography of the creators, James Hamer Morton and Charlie Bond (which might be easier to spot once you listen to my episode of The Infinite Escape Room, guest starring Charlie and James).

We played the extended edition – a slightly more difficult version of the game designed for escape room enthusiasts.

Moscape takes inspiration from the best elements of the previous two online games and peppers in some unique puzzles that fit in with the theme.

The game opens with a systems puzzle that might be a steep learning curve for those who haven’t played Deadlocked’s previous games. We thought after tackling a similar puzzle in The Insiders and The Cyphstress, we’d be pros by now. But it still took us a little bit to solve.

Guided by Joey, signposting was smooth sailing all the way, and we drifted from one puzzle to the next with ease.

Hints come from Joey in the chat – I can’t remember taking a hint, though our end-of-game certificate says we did.

There’s loads of extras in this game beyond the puzzles. The game starts with a ‘corporate fun’ Movember quiz, and you finish the game with a choose your own rap, played by Brandon from ESCAPETHEROOMers.

And we discovered as we went along that you can even earn achievements while playing the game – something I’d not seen any other escape game do.

I’m kind of mad at myself for not getting 100% on the achievements, but you can’t win them all.

Deadlocked’s Moscape room is great fun. Being a charity collaboration, it’s more accessible than their first two games and so is an easier entry point into Deadlocked’s puzzle-verse. So if you fancy yourself a more serious puzzler, I recommend playing the extended edition (just add EX at the end of your game code when you first play).

The game lets you become hacker and detective all in one, and its heart and humour carry you through to a satisfying conclusion.

The thing I love most about Deadlocked’s rooms is that you’re never just a player trying to get to the end goal. They craft characters that you can’t help but bond with, and the journey becomes almost as important as the destination. Like I said when playing The Cyphstess, you’re left with a warmth that goes beyond the satisfaction of winning.

The Movember Virtual Moscape Room
Designed by Charlie Bond and James Hamer-Morton
Cost: £15 (£5 of which is donated to Movember)
Duration: 90 minutes
Requirements: Computer / laptop with Internet access. A pen and notepad might come in handy too.