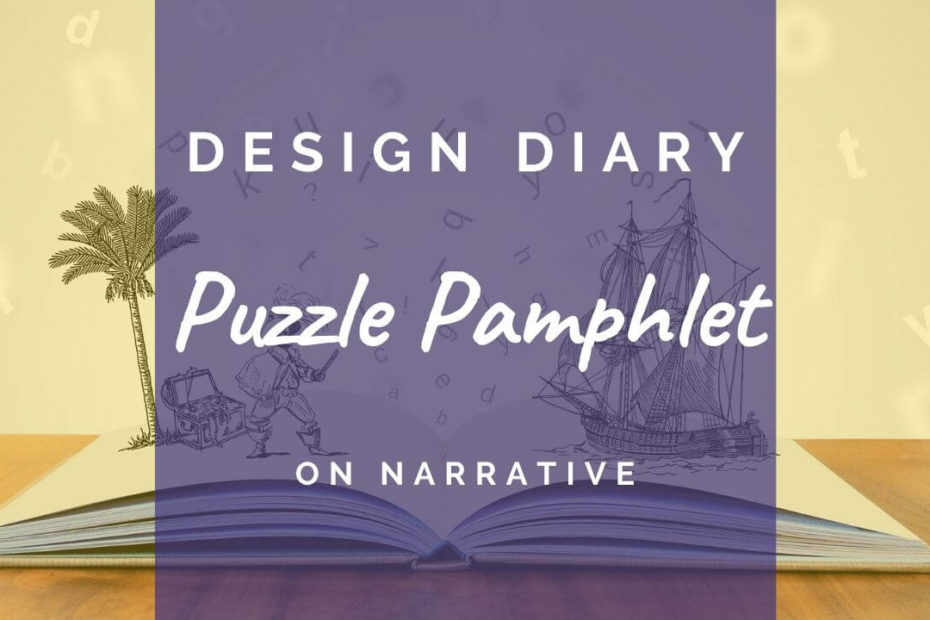 An update on the Puzzle Pamphlet project and how I’ve gone back to basics a little bit.

Here I’ll talk through my though processes, highs and lows of designing and creating a escape-adjacent puzzle experience I’ve dubbed the Puzzle Pamphlet. It’s one of my 2020 goals to get it published before the year is out.

As I sit here typing this, there are around four or five different versions of the first issue of Puzzle Pamphlet around me.

There isn’t a great deal of variation between them, if I’m honest. Each one has a single puzzle changed, or I’ve used digital placeholder art instead of hand-scribbled stuff.

Then about a month ago I scrapped the lot and went back to square one.

There’s an ongoing debate in the escape room community about what’s more important: A good story or good puzzles. Most of the time, people tend to choose puzzles. And that makes sense – puzzles are the reason you choose an escape room. If you want story, go to the theatre.

But the importance of a solid narrative shouldn’t be dismissed. There needs to be a reason why you’re solving these puzzles. Throwing you in a room and saying ‘solve these in an hour or you lose’ has zero sense of urgency.

I’m not just talking about theme, either. Theme is important – it’s a great way to tie your aesthetic together, and can help steer your puzzle choices.

But a narrative is vital to ensure there’s a flow to the game. This is probably less apparent in physical escape rooms. But for those at-home experiences where you have time to mull over the contents of whatever box / package / crate, you need something more than just the puzzles to draw you in.

This was my problem with Puzzle Pamphlet. I knew I wanted the first issue to blend Victoriana and Ancient Egyptian themes, so I went with the vague plot of ‘an artifact has been stolen from the museum – solve the puzzles and find the secret word’.

That’s not a story – that’s a writing prompt.

Why was that artifact stolen? What artifact was it? Why are you being sent these clues? Why is the final answer just a word and not the name of the thief? And, more importantly, why are these clues hidden in an exhibition brochure?

I focused so much on the individual puzzles I had nothing to tie them together.

So I went back to square one. I knew I wanted the Puzzle Pamphlet to be a series of four issues (with a fifth meta-issue to tie the whole thing together).

From there I crafted an overarching story that could connect four otherwise disparate stories. I created the skeleton of each issue’s plot and how it tied into the overall narrative.

Now I had definite themes, time periods, rough places and storylines. A series of Pinterest boards helped me collect puzzle and design inspiration for the different issues.

So now I have an outline and I have a rough guide on how each issue will work.

Now, when I’m working on the specific puzzles for issue 1, I know what framework I’m working with.

Yes, the puzzle gives you a partial answer towards the final reveal, but what else? How does it tell you more about the story, about the world you’re in?

It’s this sense of immersive storytelling that the initial idea lacked. And hopefully it’ll work out!

How important is a sense of story and worldbuilding in the puzzles or escape rooms you play? Let me know!