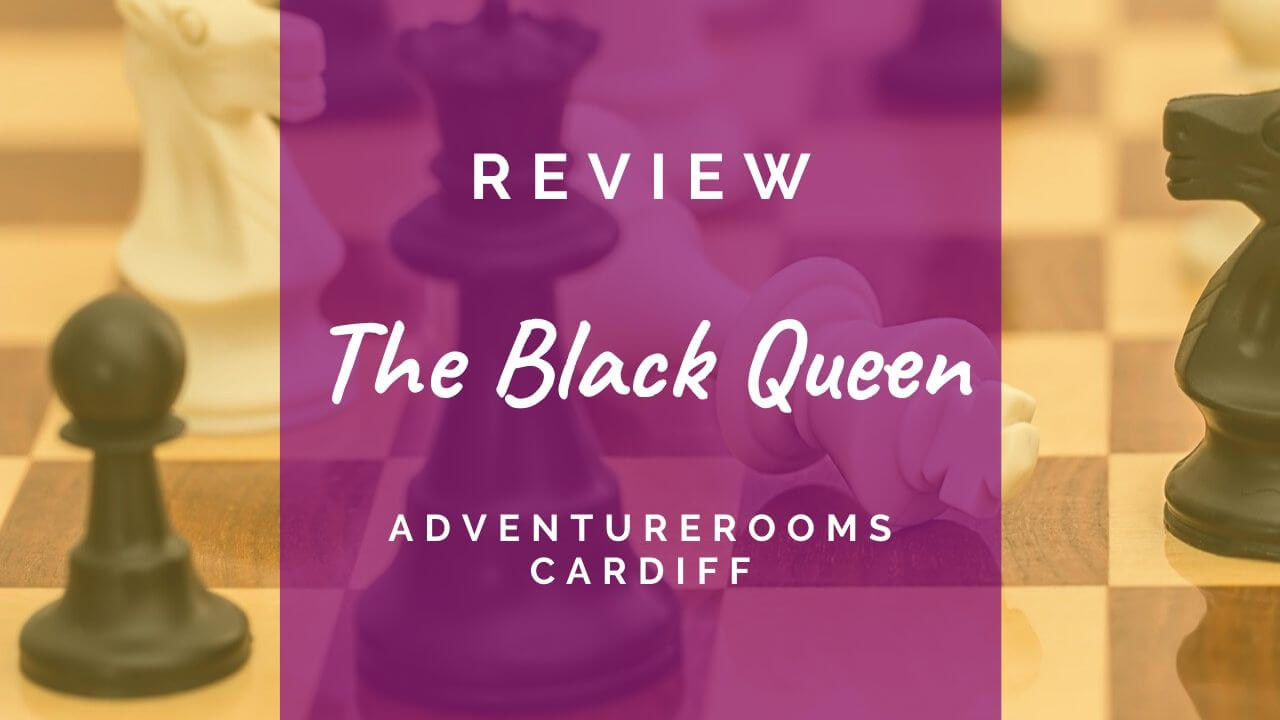 The mysterious Black Queen has you trapped in her lair. Did our quartet of hapless heroes manage to take her down in time? Well … kind of.

AdventureRooms Cardiff sits a little ways out from the centre of Cardiff, sat at corner of City Road and Newport Road. It’s conveniently next to a pub for those of you who enjoy a pre- or post-escape room tipple. That may have been a factor in our subsequent performance.

After trying out a 10-minute taster session of The Mad Scientist, I was eager to get stuck into AdventureRooms Cardiff’s second room – The Black Queen.

The Black Queen: Theme and room

The rooms of The Black Queen are well-furnished throughout. There wasn’t anything added that was a deliberate red herring. Everything in the rooms served a purpose.

There’s an almost Alice in Wonderland air to the room. Black-and-white decoration serves as the central theme – chess board, pianos etc.

That being said, there was something missing from The Black Queen that would have aided to fully immerse us into the theme.

I think a little more attention to what purpose each room was supposed to serve beyond “a box with puzzles in” would take it to the next level. Having rooms with a believable function is what separates a well-furnished room from a truly immersive room.

The Black Queen: Puzzles and tech

Boy , were there puzzles.

There was great range in the types of puzzles in The Black Queen, including a few innovative ones that I’ve not seen before. This room will have you searching, working on numbers, pattern recognition an dexterity.

On the whole, the difficult of the puzzles was such that it took all four of us working together to get out in the time we did. There wasn’t really any downtime for any one member.

That being said, one of the puzzles. completely flummoxed us, even with hints. We managed it in the end, but it seemed like this particular puzzle was a being a tad too clever.

The first room of the game seemed to rely heavily on one kind of puzzle. The thinking involved to solve them changed, but its core mechanic stayed the same. This didn’t detract from the fun of the room, but it was something that I noticed in retrospect.

There was some use of tech that was used to great effect. The rest of the game was with tried-and-true combination locks. The final few locks interacted well with the puzzles and had us scrambling to get the solutions in a frantic last stand.

Partially due to the similarity of the puzzles in the first room, we breezed through a portion of the game. This led us into a false sense of security, as the difficult really ramped up when we got to the final room. As Han Solo once said, “Great, kid. Don’t get cocky.”

The hint system went beyond the standard “text clues on a screen” with the addition of pictures to help on certain sticking points. This was a great way to point us in the right direction without giving too much away about how to solve certain puzzles.

Our band of heroes didn’t escape in time. But because we were so very close, our game master Keiran kindly gave us three more minutes to get out, which we did.

Overall, I really enjoyed The Black Queen. I’d say four people is ideal for this room if you want to make sure everyone has a job to do and isn’t just standing around. You won’t get completely immersed in the story, but you’ll be too busy puzzle-solving to notice.

With a great range of puzzles that’ll challenge you in different ways, The Black Queen is definitely worth a visit.

The Black Queen caters for teams of 2-7 and starts from £15 per person. You can get more info and book a session at AdventureRooms Cardiff.