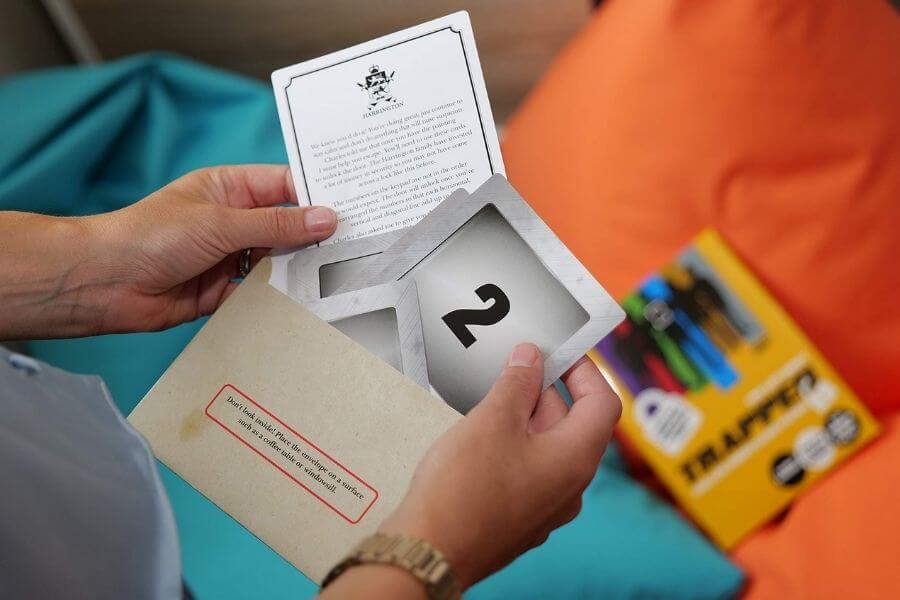 A new blend of escape room and board game that successfully brings the escape experience closer to home.

This article contains Amazon affiliate links. If you buy any products via these links, I may earn a small commission. It doesn’t cost you anything, but it helps support a little puzzler like me.

Lockdown has meant that we’ve been on the lookout for something to scratch that escape room itch. We’ve played plenty of online puzzle games, mail experiences and a few remote escape rooms.

But none of them had the feel of being in an escape room.

So when the Trapped series was announced, I was intrigued. Would this replicate the same feeling of being in a live escape game?

The obscenely-rich Harrington family invites you to an exhibition of their priceless art. Upset that his family hoards wealth, though, their youngest son, Charles, asks your party to steal a painting.

Fearing detection, Charles leaves only a series of clues to help you find the right artwork. But you’re not alone! Charles has also convinced one of the staff to help you escape.

Can you find the painting, steal it and flee the scene – all in 60 minutes?

The quality of the materials was excellent for the art gallery theme. Everything is paper-based and you’re provided with low-tack tape to stick certain things to the wall – you can’t have an art gallery without a few paintings up on the wall!

There were also some ID badge clips so we were effectively playing certain characters. This small prop addition helped with the immersion as it helped make us part of the story.

All of the materials were appropriate to the theme. There were fire exit plans, a gallery pamphlet, invitations and tickets for the exhibition. Everything was used for the puzzles, but nothing really felt out of place.

There was an inconsistency between two of the materials that used stock photos The same person was meant to be present in both but they were clearly two very different sets of people. It didn’t detract from the game but made us raise an eyebrow.

We added a glass of wine and some pretentious piano music to give it a real classy event feel. This is highly recommended to put you in the mood.

The puzzles were a mix of codebreaking, deduction, pattern recognition, logic and manipulation.

Almost everything was well signposted and had us jump around the room as we made connections between puzzles. Everything followed a logical progression and I really enjoyed the overarching deduction mechanic to find out which painting we had to steal.

One puzzle took a bit of a leap of logic – we didn’t need the solution in the end, but even after seeing the answer we thought ‘we’d never have made that connection’.

The game is branded as medium difficulty but we had no real challenges, so this would likely be less challenging for escape room veterans.

It was quite satisfying to see how some solutions to the puzzles were hidden within part of the story. There’s a good blend of theme and puzzle here, where things don’t jump out at you until you’ve taken in all of the materials.

The final puzzle was a bit anti-climactic. The excitement and energy of the heist slowed down with a final logic puzzle. It was a cool mechanic, but I felt it needed just one more puzzle to finish on that high.

The hint system is great. Every puzzle has a number of staged clues that you reveal using a code reader,so you can’t accidentally spoil the answers.

Having the puzzles be placed around the room gave us that physical excitement of running around the room to look at different clues – it’s the closest we’ve come to that actual escape room feel while at home.

I was initially concerned that only one of us would be able to play, since someone would have to ‘set up’ the room and so would know everything. Luckily this isn’t the case. The set up instructions make it so that you can get everything ready without getting anything spoiled for you.

Trapped: The Art Heist is a fun and innovative take on the play-at-home escape game set up. It’s a great and inexpensive way to bring the escape experience home.

I’d recommend this for families or those fairly new to escape rooms. For experienced players you’d probably do better with their more difficult game – The Bank Job.