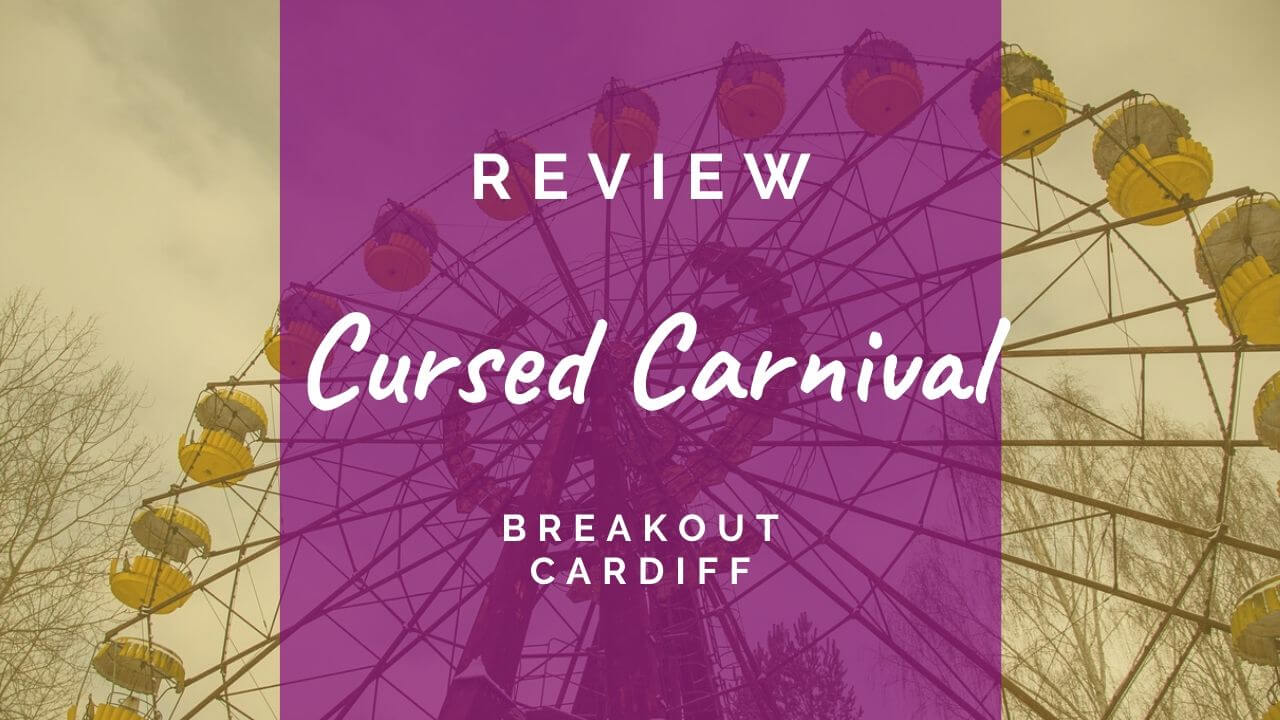 Francesca needs to be put to rest, and Breakout Cardiff’s Cursed Carnival wants your soul. What’s an escapee to do?

It was with much anticipation that I entered Cursed Carnival. I thoroughly enjoyed Breakout Cardiff’s hardest room – Sabotage – and I was keen to take a look at their horror-themed offerings.

It was a toss-up between Cursed Carnival and Disturbed. I figured that, since it was Valentine’s Day and I was on a nerdy date with my wife, I should take her to the fair.

You’ve returned to the fair on its last day, determined to lift a curse placed upon the doll you won. The problem is, the carnival leaves town in an hour. Because of course you’d wait until the last minute to lift a deadly curse.

The rooms were well-decorated throughout and all in-keeping with the fairground theme. Expect clowns (not real clowns), jack-in-the-boxes, playing cards, rubber ducks – the works. It’s every town carnival you visited as a kid.

I felt that there wasn’t much of the “cursed” aspect to really amp up the sense of horror. Aside from the initial room, Cursed Carnival was as brightly coloured as you’d expect from a day at the fair.

Most escape rooms shape themselves as “box 1 – box 2 – box 3” when it comes to the room setup. Cursed Carnival was a little different. The simple inclusion of a non-box-shaped room helped to add variety to the experience and add a little bit of tension to the proceedings. And given the horror theme, it helped increase the tension of never knowing what’s around the corner – in this case, literally.

As an added bonus, Cursed Carnival had bits and pieces of costume dotted around the rooms, meaning a chance to dress up and get stuck into the theme.

Cursed Carnival had a good mix of puzzles throughout. I particularly liked that you’d get elements for a puzzle at the start of the game that you had to take with you and use later on (while not really knowing if you were just carrying a red herring the entire time).

Traditional padlocks are few and far between, and the few uses of them are solved in less traditional ways.

Our game operator forgot to put torches in the room, so we spent the first five or so minutes in complete darkness. Eventually we caved and used our phone torches, but this made the initial puzzles considerably more difficult.

Our operator eventually realised this and gave us an extra five minutes to make up for the blunder.

I really enjoyed the scale of difficulty with these puzzles, and they were varied enough that we were both able to contribute. For example, I have no ability with spatial puzzles, but my wife excels in them, so the range of puzzles complemented our strengths well.

Tech was used sparingly throughout, giving more credence to the homegrown carnival theme. But when it was used, it was done so to great effect.

The penultimate room was by far the most difficult. At one point I raised my arms to the heavens and begged the operators to give us a hint. I was also guilty of breaking one of my cardinal rules of escaping: I began to obsess over one particular puzzle that turned out to be a red herring.

Clues are only given when they think you are behind the usual time for progressing on a certain puzzle. The “no news is good news” hint system gave us a confidence boost in the early stages of the game.

All the fun at the fair

We managed to lift the curse and escape the Cursed Carnival with 10 minutes on the clock. The initial scramble in the dark and later puzzles had us worried that we weren’t going to make it.

Breakout Cardiff have another winner with Cursed Carnival. It was tense, challenging and thoroughly enjoyable. I can’t wait to try their other rooms – Classified and Disturbed.