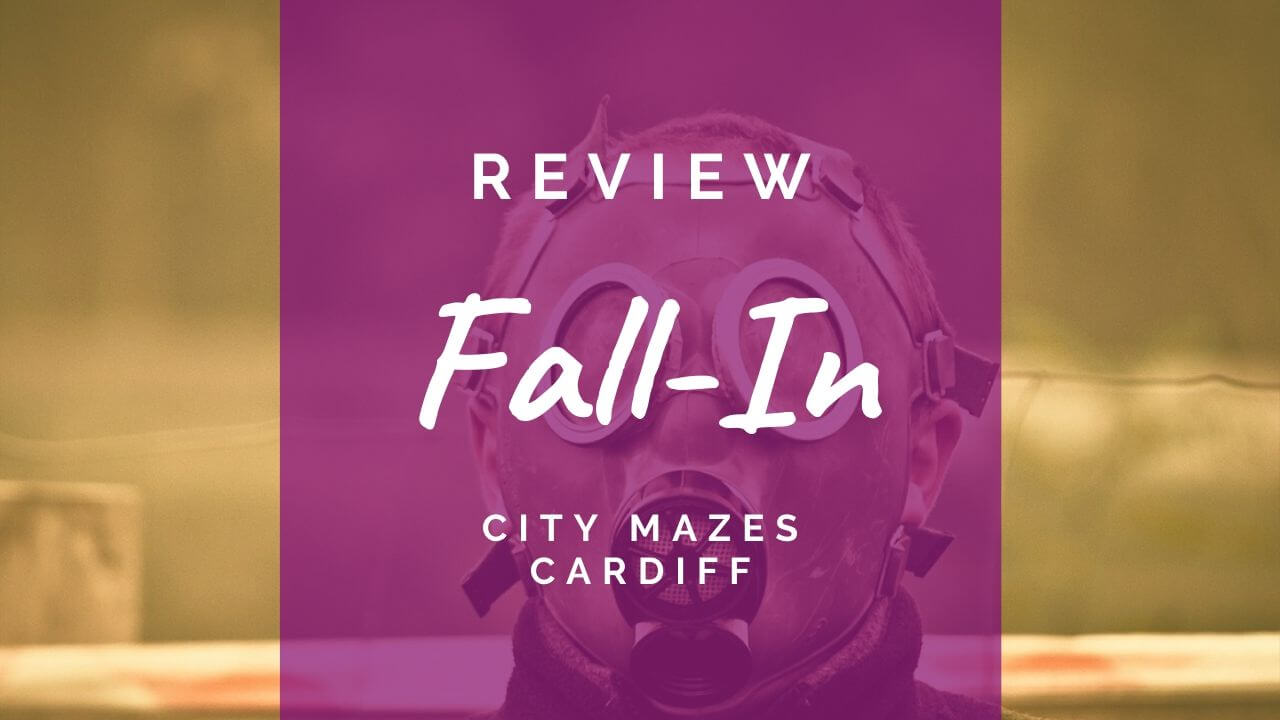 To survive the nuclear fallout, you must work together with your past selves before the timer hits zero. Sound like fun? Let’s jump in.

A team of seven stroll into City Mazes Cardiff HQ, confident in their ability to work together and get out with plenty of time to spare.

Then they’re told that they have to solve the puzzles in separate rooms before teaming up to tackle the final challenge. Oh, dear – this is going to be tougher than I first thought.

This was how our team entered City Mazes’ Fall-In. You’re all inside the same nuclear fallout bunker, but half of you are stuck in the past, before the apocalypse. The other half are stuck in the post-apocalyptic bunker.

You have to communicate with your counterparts across time in order to make it out alive.

Though the theme was pre/post-apcocalyptic, the rooms were quite sparsely decorated. This meant that there wasn’t a great deal to immerse the players into the theme.

This was especially evident in the pre-apocalyptic area, which had only a little more decoration than our section.

This is something I’ve heard from a few people who’ve tried this room out – “you can tell you’re in a kind of warehouse”. While this doesn’t detract from the game, that little extra production value can really add to the immersion.

Though the game’s built-in communication system was fun to discover and a neat idea, it didn’t work as well as we’d hoped. In the end we resorted to shouting to one another through the walls, which was more effective.

The room offers a good mix of searching, mental puzzles and some skill. I particularly liked that you only get a set number of tries with certain code locks.

Too many errors and you can’t  make another attempt for up to 20 minutes. This meant we were a lot more careful about making sure we had the answers spot on.

I spotted a discarded receipt with a host of numbers scrawled on the back during our session. Judging by the number of guesses they likely took, I’m guessing that unlucky team didn’t manage to get out!

Where this room really stands out, though, is its emphasis on co-operation and teamwork.

You need to communicate across separate rooms in order to be reunited before you can progress further. In some cases you both possess fractions of a clue. Only when you put them together can you figure out where you need to focus your attention.

For the most-part this means that the teams are at an even pace and don’t steam ahead to quickly. However, at one point our sub-team couldn’t progress for a good 5-10 minutes because the others were stuck on a puzzle.

When they solved it, they realised that they’d overlooked one simple thing that we did almost instinctively. A word of advice – go over everything with one another, even if you think it’s trivial.

The hint system involved pressing a buzzer when you’re stuck. A member of staff would then enter the room and give you a clue .

Having someone enter the room broke the immersion, but it was good to only get hints when we asked for them.

We made it out of the room with three minutes to spare. Getting stuck on one puzzle ate up most of our time, and for a while we thought we weren’t going to make it.

There’s quite a nice payoff in the final stage of the game. It doesn’t rely on mental puzzle-solving, but means you get a slice of action in your game too.

Fall-In was a fun co-operative game that offers players a challenge. I felt that more could have been done to make the room more immersive and integrate better with the theme, though.

Fall-In is suitable for teams between four and 10 people (bigger teams work better due to the initial split nature of the game). Prices start from £25 per person. You can get more info and book a session at City Mazes Cardiff.

Have you played Fall-in? What did you think of it? Let me knwo in the comments!