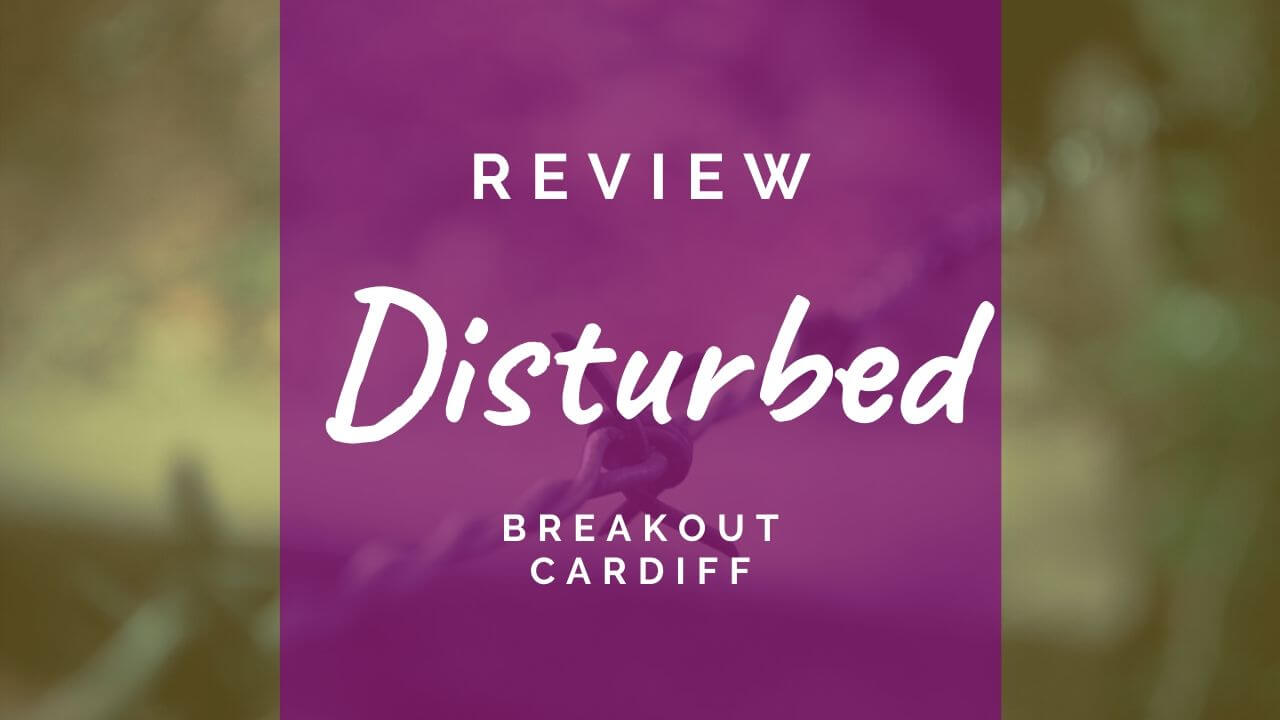 Trapped in the lair of a serial killer with only your wits to enable your escape. Hope you have a head for maths!

Serial killers are big business these days. Thanks to the likes of Netflix, there’s been an exposion in popularity for murders and ne’er-do-wells in recent years.

Also thanks to the Saw franchise, the serial killer theme and the escape room format work very well together. It was with this in mind that I wandered into Breakout Cardiff‘s serial-killer-themed room – Disturbed.

Disturbed is a relatively small room compared to the others on offer at Breakout Cardiff. This adds to the claustrophobic feeling but if you’ve a bigger team you may find yourself  tripping over each other’s toes.

The room makes good use of the space, however. All the paraphrenalia you’d expect from a serial killer’s hideout adorns the walls and floor, including ‘souvenirs’ from previous victims. The atmosphere is tense.

The use of video at the beginnning and at the half-way point in the game did a good job at setting the scene and gave us a milestone to let us know we were progressing at a good pace. It made me realise that this could  be incorporated in a more interactive way by having the mysterious figure talk to you live – berating your progress and offering you clues.

Disturbed has excellent variety in its puzzles, from maths-heavy to abstract thinking. This is the kind of room that needs a team of diverse skills in order to guarantee success. Luckily, that’s exactly what we had.

In keeping with the theme, Disturbed is a more traditional room with a number of combination locks peppered throughout the room. The drawback to this is that you’ll have to attempt the same code on multiple padlocks to see which is the correct one. Our team of five made short work of it, but if you’re a duo, it may eat into your time.

This room was quite a lot more maths-heavy in comparison to the other rooms. And it also made me realise that my maths  is terrible when put under pressure. I was likely responsible for the biggest delay (and the biggest number of clues) for our room.

The final puzzle was a little anti-climactic, where the final code is revealed to you in a less-than-satisfying way. Part of the thrill of the escape is figuring out the final few numbers that enable your release, but in Disturbed, that feeling is somewhat dampened by having the code more-or-less shown to you.

We managed to escape – the exact time is lost on me as we did the room a  good few months back.

Disturbed is a fun and very challening  room that benefits a diverse team in order to get the most out of it. Our team of five was probably a little too large, if I’m honest.

Though it’s the most horror-centric game at Breakout Cardiff, there are no scares, so you can play safe.

Recommended for teams that want something a little higher up on the difficulty curve.

Note: I played this room back in November 2017, and so some of the details may not be remembered with 100% accuracy.