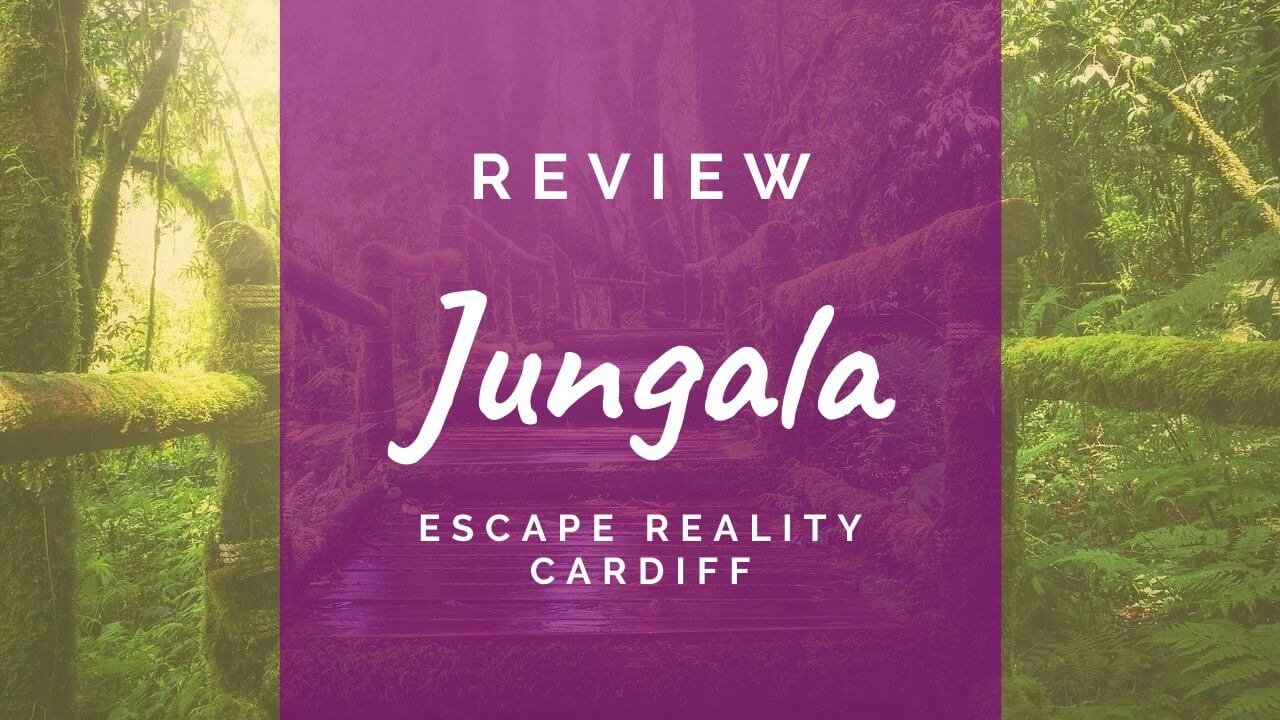 In the jungle you must wait until the clues let you escape.

I’d been wanting to play Jungala for a while. After my severe disappointment in City Mazes’s Bamboozled, I wanted to see if Escape Reality could do better.

So it was after the hollow victory of escaping Press Start that we booked in to play Jungala. And we weren’t disappointed.

CHECK THIS OUT: [Review] Bamboozled at City Mazes Cardiff

You have discovered an old board game in your attic and once opened you are engulfed by a vortex and transported into an alternative realm. After only seeing a glimpse of the terrible world inside you are thrown back into reality.

Vowing never to approach the game again you attempt to leave but the door has been locked trapping you in. Glancing over to the game you see the words “The dice have been rolled.”

The game is split between the ‘real world’ and the ‘game world’, and the transition from one to the other worked well.

It’s an Escape Reality room, so the decoration was great throughout. The ‘real world’ room looked like you’d just stumbled into an old living room. The ‘game world’ rooms had a good selection of props, and I resisted the urge to make a smash and grab for the first bit of costume I saw.

The final room didn’t really make a lot of sense, story-wise – it just seemed to be there because there was some space leftover.

There were one or two fun ‘a-ha’ moments throughout the room that surprised us, especially in the penultimate room.

All of the rooms were solidly built and well decorated, which is Escape Reality’s forte.

There were some props in the first room that were blatantly too modern for the time period in which this game is set – it’s a minor detail but they could have just as easily set the game in the present day and there wouldn’t be a problem.

Jungala had good puzzle diversity with a mixture of searching, collection, dissection and sequence puzzles.

There was one puzzle in particular where I’d found the answer fairly quickly, but when in input the code, nothing seemed to happen (even though the lock confirmed it was right).

I’d been expecting a door to open in the room, but instead it had opened something else. According to our games master, I’d walked right past it and looked directly at it while trying the door for the third time. Lesson learned.

There wasn’t anything too challenging in this room. Some of the pieces of decoration set us back a little as they seemed to be red herrings, but otherwise the puzzles were well signposted and the flow was smooth.

There was also plenty for us to work on together – one puzzle in particular was only done as quickly as it was because we both had our eyes on the prize.

Some of the puzzles in other Escape Reality games are overly-complex, but this wasn’t the case in Jungala. It’s a great entry-level room for you to get a feel for how their designers think.

The hint system at Escape Reality isn’t great, as I’ve mentioned elsewhere (see my review of Alcatraz for more on that). We wound up using it once because I’d worked my brain into a corner and gave in on one particular puzzle.

The hint it gave we’d already figured out, but it made me take another look at the puzzle and so made me realise that I’d made a huge mistake in trying to solve it.

Our games master was Jordan, who was fantastic and chatted with us before and after the game. He checked in with us about any potential phobias beforehand (it’s a game based on wild animals, beasties and creepy crawlies, after all), which was appreciated.

He also did a great job at setting the scene with the story at the beginning, adding bits of additional scene-setting into the game premise.

CHECK THIS OUT: Five escape room archetypes (that look suspiciously like the cast of The Breakfast Club)

Did you expect anything else? We made it out with 21 minuts left, earning us a place on the leaderboard!

Jungala is a fun, well paced room with a good variety of puzzles that (thankfully) don’t rely on clever tech to maintain immersion. There’s enough here for a team of four to work through and not step on one another’s toes.

It’s Escape Reality’s least challenging room and so serves as a great and fun entry point to the venues games. Definitely give it a go.

Have you played Jungala? What did you think of it? Let me know in the comments!