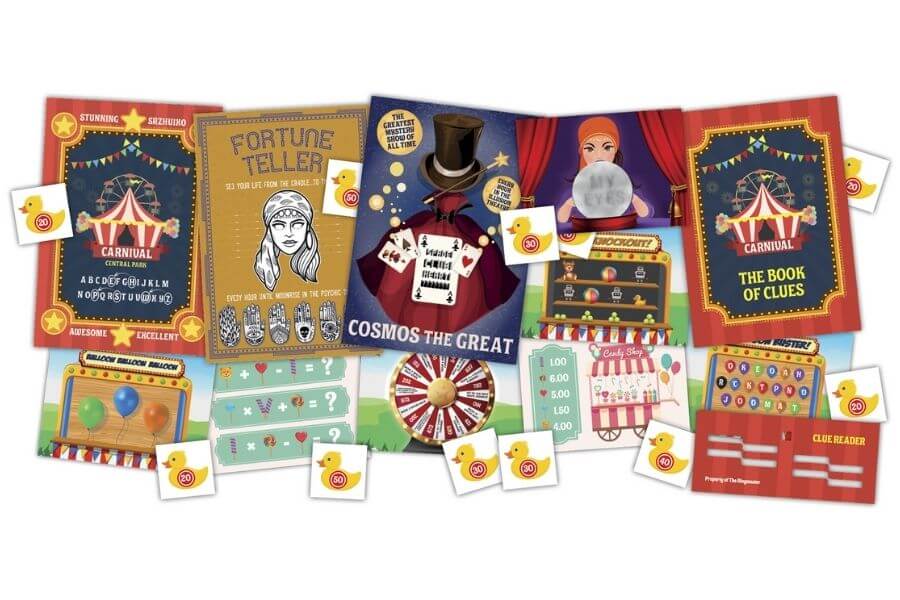 If you’re looking for some fun themed puzzle activities for a kid’s birthday party, this would be a great fit.

Check prices for Trapped: The Carnival on Amazon

This article contains Amazon affiliate links. If you buy any products via these links, I may earn a small commission. It doesn’t cost you anything, but it helps support a little puzzler like me.

We had a lot of fun playing The Art Heist – the other play-at-home escape game in the Trapped series. So when our escape pals at Review the Room suggested a game swap, how could I say no?

Your lifelong dream is to work among the jaw-dropping performers of Muggins Carnival. But wait! Nothing is what it seems as you race to solve the Ringmaster’s baffling puzzles.

Work together as a team or go head-to-head with other players to see who’ll be crowned King or Queen of the carnival.

As we did with Art Heist, we gave the game more of an carnival-event feel by adding popcorn and sweets. I even donned some dubious clown makeup and a top hat to get into character.

And try as we might, you can’t find non-creepy carnival music on YouTube. So I guess this was a cursed carnival?

The game was light on story – you’re at a carnival, have fun! This lighter feel came across well in the materials.

Although you can set up the various cards anywhere in your house, they’re rather neatly grouped into attractions and sub-themes. This meant we had a ‘games’ area, a ‘fortune teller’ area, and so on.

The illustrations were a bit more inconsistent in Carnival than with Art Heist. The quality of the posters in the pack were great, but the puzzle cards looked a little less refined.

There is no ‘escaping’ in this game. You’re there to get a high score. This means that the game is completely non-linear – you try whatever puzzles you like and check them against the arcade machine scoring system.

This game can be played co-operatively or competitively. You really need more than two people for this one – we didn’t speak to one another during most of the game, except for checking our solutions.

We played co-operatively, but it was easy for each of us to break off and solve a puzzle on our own.

There was less of a team effort than with Art Heist. But I’d say a larger group of people going head to head would be more fun.

The puzzles themselves are as varied as the attractions at the carnival. There’s a mix of maths, decipherment, pattern recognition and sequencing puzzles. None were particularly challenging but most were satisfying to solve.

The final part of the game was much more dextrous … and we sucked at it. It wasn’t related to the puzzles, which was a good thing as we were terrible at it. It did end the game on a fun high note though.

We used one hint throughout the game.

As with The Art Heist, the hint system with the Trapped Escape Games works great. A grille decoder lets you see progressive hints for your specific puzzle without spoiling anything for yourself.

It’s rather innovative and I’d like to see it replicated across other systems.

The setup for the game was really easy too – the reverse of each card or poster tells you where to put it in the room e.g. a table or a wall, so you can plan your room set up ahead of time.

In future we should use more of the house rather than just one room to ramp up the physicality of being in an escape room.

We blitzed through the game in no time at all, but we still had fun. This isn’t a game for escape room enthusiasts by a long stretch.

If you’re after a challenge, I’d recommend going for the other games in the Trapped series – The Art Heist and The Bank Job.

But if you’re looking for some fun themed puzzle activities for a kid’s birthday party, then The Carnival would be a great fit.

Check prices for Trapped: The Carnival on Amazon