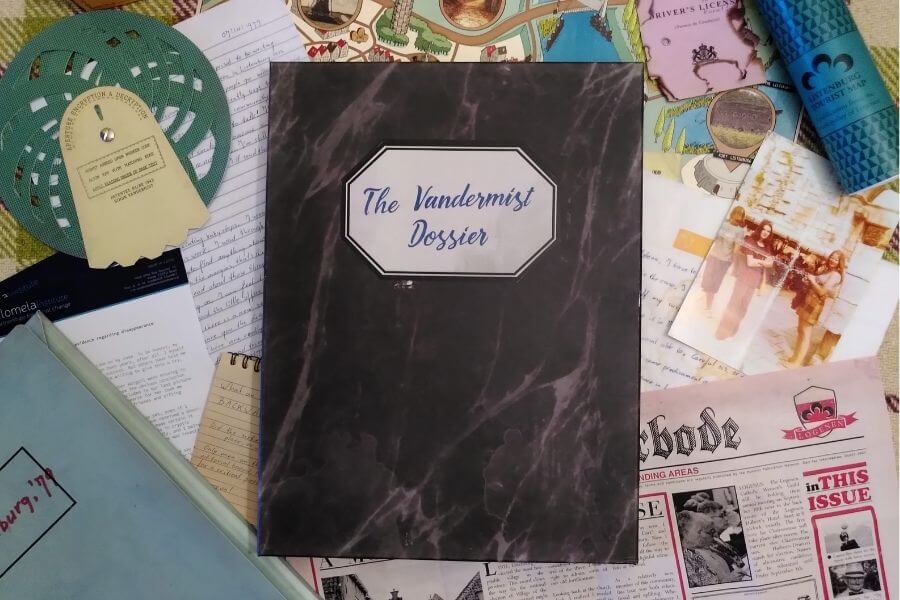 When playing at-home puzzle games, you tend to see the same time periods being played out over and over again.

It was refreshing to hear about The Vandermist Dossier – an English-language edition of a Dutch game centred around a 1970s missing persons case.

So when the opportunity came to give the game a whirl before it launches on Kickstarter on 28 September, it was a no-brainer!

CHECK OUT THE VANDERMIST DOSSIER ON KICKSTARTER

The Vandermist Dossier is a treasure trove of beautiful, touch-real evidence from an old missing person’s case in a tiny Dutch village.

Untouched since the 1970s, will you follow the clues and figure out what happened to 19-year-old amateur sleuth Abigail Vandermist?

From the moment we opened up the case file we could see we were in for something great.

All of the materials in The Vandermist Dossier are of excellent quality, and for the most part feel completely legit. We had no trouble suspending our disbelief that we were handling a casefile from the 1970s.

Deliberate imperfections like tears, burns, and printing errors all cemented the sense of realness about the materials we were handling. And as you pick through some of the components, there’s definitely a sense of intimacy as you pore over the personal effects of someone who’s gone missing.

And it has the most innovate decoder I’ve ever seen. It’s really something else.

The game has you looking through the possessions of Abi Vandermist who went missing while investigating another missing person’s case. Abi fancies herself a bit of a sleuth so leaves a trail of clues and ciphers for you to solve in order to find her.

The storyline is gripping and takes one or two turns along the way, building up to something much more explosive in future chapters. The storyline of this English adaptation was aided by Manda Whitney of the Room Escape Divas podcast, and with that caliber of puzzler working on the game, you’re in safe hands.

Fun reveals and a-ha moments throughout

There are several wonderful moments throughout The Vandermist Dossier with satisfying reveals, many of which were hiding in plain sight. It’s a weirdly good feeling to be pointed towards something and you go “wait, that was there THE WHOLE DAMN TIME?!”

On that note, the signposting throughout the game was excellent, leading to a very smooth game flow. Only once did we get ahead of ourselves the natural flow of the game, but it didn’t detract from our experience (we’d basically managed to skip over one puzzle).

Given the nature of the game, there’s a good amount of sleuthing and deductive reasoning to be had, and it all comes together to solve one of the game’s centrepieces at the halfway point.

Some of the puzzles and the game flow put reminded me fondly of the Hincks Gazette, where puzzle solutions are instructions on how to solve something that’s hidden within the text elsewhere. This meant that there was no confusion about whether or not we’d solved each puzzle – it was as plain as day if we were successful.

We found The Vandermist Dossier the right level of challenging. We got stuck on one puzzle (ironically, the one we’d skipped ahead of), and needed a steer on solving it.

We wound up using hints on one puzzle, which gave us gradual hints before offering a solution.

What I really appreciated was that, for most of the puzzles, there were ‘explanations’ offered after hints but before solutions. These gave you step-by-step instructions on how to solve each puzzle without giving you the answer.

I’d not really seen this step in a hint system before (or at least I’ve not seen it in a game as being marked as something other than a hint) and I think it’s a great step that other games should emulate.

Even if I’m being incredibly thick and aren’t getting a puzzle, I’d still like to know how it’s solved rather than just be given the final answer after a vague hint or two.

An exciting and gripping adventure

We both thoroughly enjoyed The Vandermist Dossier. From the moment we opened up the box to submitting our final answer (and damn, the reveal of that final answer is so satisfying!), we had a blast. The game is well put-together with innovative components and a gripping narrative.

I’d recommend this to puzzle solvers who like a good balance of story and puzzles, and who like to get involved with physical components. Fans of The Hincks series should get a kick out of the puzzles too (though the tone is more serious).

The Vandermist Dossier hits Kickstarter on 28 September and I thoroughly recommend you check out the campaign. If this preview is anything to go by, you’re in for a treat!

The Vandermist Dossier
Designed by Ruud Kool
Cost: $49 (convert to GBP)
Requirements: Notepad and pen, phone or tablet with access to the Internet.

CHECK OUT THE VANDERMIST DOSSIER ON KICKSTARTER

previousEscape from the Cursed Galleon – Roomination
nextThe Mask – Beyond Breakout