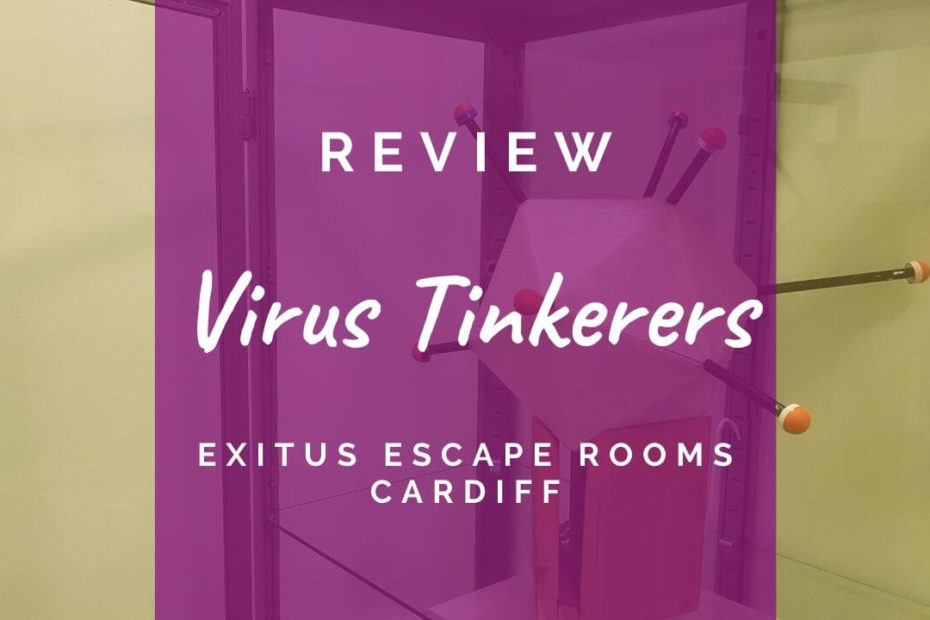 An escape room/ cancer research mashup that teaches you while you solve puzzles.

We were invited to playtest Virus Tinkerers before the room opened to the public. As such, this isn’t a full review since the room wasn’t fully finished and many elements will have changed.

Welcome to the Tenovus Cancer Care Research Labs. Dr Alan Parker has been conducting ground-breaking research in the field of fighting cancer. He’s managed to change the DNA of specific viruses and train them to attack cancer cells instead of healthy cells.

Dr Parker is away at a conference. You arrive in the lab and realise the electricity had failed in the cleanroom and the backup battery, which powers the incubator has been running all weekend. It now has just 60 minutes of energy left, if it runs out of fuel the retrained viruses will deteriorate and fail.

It’s down to you to gain access to the cleanroom and change the backup battery to the incubator before Dr Parker returns from the conference.

The Virus Tinkerers room has been repurposed from Exitus’s original room, Plague (check out my review!). The lab setting is still very much there, and given the story of Virus Tinkerers it feels legit.

What I appreciated about the story in this room was that the stakes weren’t as high as with most other rooms. This wasn’t “Save the world!” or “Find the cure for cancer!”.

It was much more grounded in reality – you must restore the power to the incubator before years’ of research is lost. With smaller stakes, it’s much more believable to be doing what you’re doing.

The room hadn’t had much of its decoration added when we went in – almost every element was meant for a puzzle. But what was there was in keeping with what you’d expect to see in a lab – microscopes, incubators, test tubes etc. There was only one puzzle element in the first room that didn’t really fit in with the science lab theme.

The room also had nods to its connection with Tenovus – a photo of the original founding members (the ‘ten’ in ‘Tenovus’) and posters outlining the research and fundraising that the charity achieves.

Most of the puzzles in Virus Tinkerers I’d not seen before in an escape room, which was refreshing (and which completely threw me off for the first 10 minutes of the game!).

Having the task of needing to incorporate elements of the Tenovus research meant that the room is creative with its puzzles, using lab equipment in interesting ways to progress through the game.

One element in particular was a recurrinng decoding mechanism that we learned afterwards is something actually used by cancer researchers and geneticists. What better way to make you feel like a scientist than to have you use the same tools?

The puzzles were a mixture of observation, pattern recognition, a touch of logic and a little dexterity.

Hints were provided by Walkie Talkie, from our ‘lab contact’. Hints were only given when we asked for them, though. This worked fine given the theme of the room, though I’m a sucker for the traditional ‘clues on a screen’ system.

I’ve said it before, but I enjoy the before and after bits at Exitus as much as I do playing the room. Our games masters Ceri and Ellie are great to chat to, and their dog Watson is adorable. After we’d played the room, they chatted about some of the mechanisms behind it, and their passion for creating these games is obvious.

Our team of two broke out in about 52 minutes – it set the record at the time. I gather that record has already been beaten, but I’m not bitter. We used several clues to get there, too. Don’t let the charity partnership fool you – this isn’t the Strictly Come Dancing Christmas Special where everyone did wonderful- it’s a challening room.

As far as I’m aware, Virus Tinkerers is the first of its kind, at least in Wales. Having a permanent escape room that also teaches you something valuable about the good work others are doing is admirable. Its sterile lab theme is unassuming but contains a breadth of refreshing puzzles that were new and challenging.

I’d recommend this as a three or four so you’ve got the full range of skills to hand.

previousEscape room group photos – how to get the most out of them
nextPuzzle Pamphlet Design Diary #02: On narrative