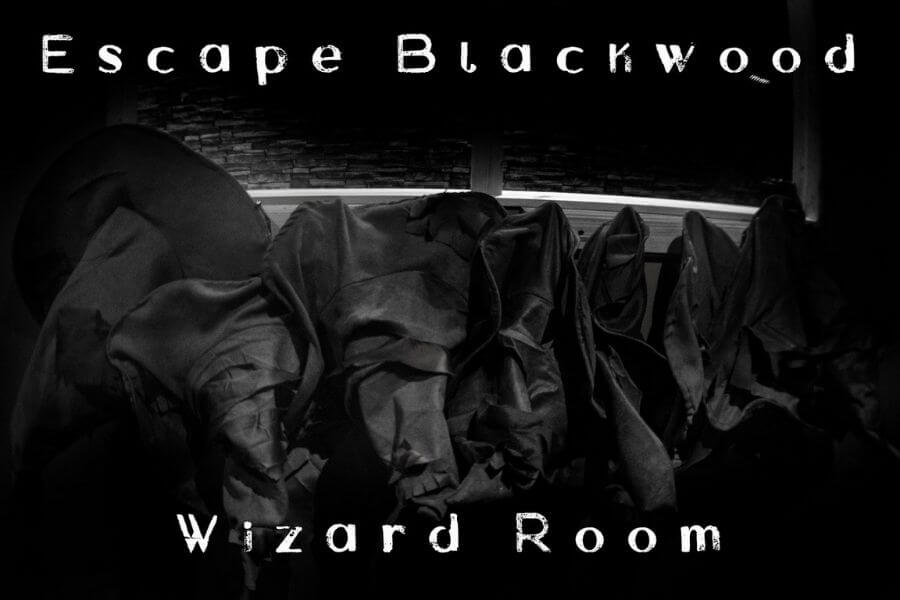 The final leg of my week of escape rooms was at Escape Blackwood. It’s a cruel irony that it’s the closest escape room to where I live and it took me years to actually go there.

I managed to sneak in two cheeky games between lockdowns, playing Hotel Crime Scene and Jumunga.

And while we’re waiting for their latest room – Cursed – to be ready in a few months, we popped in to tackle The Wizard’s Study.

You have been tasked to break in and steal a precious artefact from a powerful wizard. With the wizard’s security spell in place, you have been trapped. You have exactly one hour to both steal the artefact then solve the clues to escape. With twists and turns with every clue, can you break the spell and defeat the wizard? How fast will you escape?

Of the three rooms I’ve played at Escape Blackwood so far, The Wizard’s Study had the best decor. As you might expect with a game involving wizards, there were quite a few nods to a well-known magical franchise throughout.

This game is designed for families and kids, so it’s got all the elements that would make Harry Potter fans happy – wands, dragons, owls, a Sorting Hat and potions to name a few.

The build quality was decent, though we had a fair bit of trouble battling with a particularly stiff lock. There was some nice subtle use of tech in the room made it that little bit more magical, too.

There was a decent space that opened up after the first third of the game, so you could comfortably fit a team of 4 with enough to do.

Before we went in, our host Adrian assured us we’d smash it. “It’s a room designed for families with kids, you’ll have no problem,” he said.

We struggled with the first puzzle! But, in our defence, this particular puzzle is one where a child would have a distinct advantage over an adult. Sneaky!

The lion’s share of the puzzles are in the second, main room, but there was a decent back-and-forth between the two, which I enjoyed.

There’s a fair amount of reading involved in this room, and one or two puzzles took us a bit longer to get as we’d initially dismissed some of it as flavour text. Rookie mistake.

There were some really nice collection-based puzzles that I enjoyed and I think kids would really get a kick out of.

Aside from the one stumbling block at the beginning of the game, the game flow was good and we didn’t have many problems figuring out where to go next.

We used one hint (curses), which was displayed on the screen towards the start area. Our host, Adrian, was friendly and happy to chat to us afterwards about the game and his experiences in making these rooms.

I see The Wizard’s Study as a solid choice for a day of family fun. Kids especially should get a kick out of being a wizard for the day, and the game is about the right level of challenging with adult supervision.

All-adult groups or enthusiasts might want to consider Hotel Crime Scene or Jumunga for a bit more of a challenge.